The Fundació Mies van der Rohe and the Ajuntament de Barcelona announced today, at a press conference held in the Mies van der Rohe Pavilion, the resolution of the 1st Lilly Reich Grant for equality in architecture that has been granted to the proposal RE-ENACTMENT: LILLY REICH’S WORK OCCUPIES THE BARCELONA PAVILION by Laura Martínez de Guereñu.

The event was presented by Janet Sanz (president of the Fundació Mies van der Rohe), Anna Ramos (director) and Laura Martínez de Guereñu, who has presented her research proposal.

The Lilly Reich Grant
In the conception and development of its activities, the Fundació Mies van der Rohe wants to generate research and debate on modern and contemporary architecture in a permeable way facing paradigm changes in architecture and society.

The scholarship supports the study, dissemination and visibility of contributions in architecture that have been unduly relegated or forgotten, made by professionals who have suffered discrimination because of their personal conditions. It will also seek to promote equal access in the exercise of architecture.

Exceptionally, in its first edition, the scholarship is allocated specifically to the study of the work of Lilly Reich and in improving knowledge and dissemination on an essential figure in the history of modern architecture. The Lilly Reich Grant for equality in architecture is endowed with 9,000 euros.

The period for the admission of proposals for this first edition ended on July 20 with the reception of highquality projects from Germany, Italy, Uruguay and Spain. The jury valued these proposals and their final decision has been made public today.

The awarded proposal
With the proposal Re-enactment: Lilly Reich’s work occupies the Barcelona Pavilion, an archive research which still today has not been brought forward will be carried out. An important number of relevant graphic material that Laura Martínez de Guereñu has at her disposal, will be studied and disseminated with the final aim of writing and publishing an academic article and making a proposal for an intervention in the Barcelona Pavilion.

There is another story of destruction and resistance related to the Barcelona project, which took place during 2nd World War. The loss not only affected buildings, but also highly valued documents that support the memory of the collaboration of Lilly Reich.

This proposal will review documents from Barcelona, Dessau, Frankfurt and New York. The review of materials which englobes plans, postcards of the industrial exhibitions of the 1929 International Exhibition, recordings of the presentation by Lilly Reich in a 1929 symposium or the correspondence of Lilly Reich with Edward Ludwig, a Bauhaus student who kept Mies’s drawings when he emigrated to America. E. Ludwig gave his own works to the MoMA in 1980, and until now they have never been studied in order to frame the question of the collaboration of Lilly Reich and Mies in Barcelona. This project will give the first opportunity to do so. 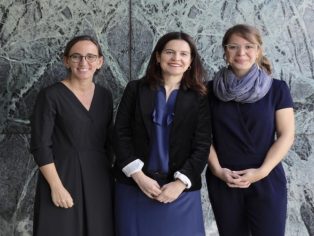