Last week, the WAN AWARDS hosted an event at the OBA in Amsterdam to celebrate six diverse completed and future schemes that had been shortlisted for the 2014 WAN Civic Buildings Award. Each of these handpicked projects had been selected for its architect’s understanding of what it means to be truly ‘civic’, through a rigorous process taking into account scale, context, and justification of form.

After hours of deliberation, the judges were in almost unanimous agreement with the shortlist – a selection of architectural works at varying scales, and coherent, appropriate responses to their function and context.

The three shortlisted completed buildings are: King’s Cross Station in London by John McAslan + Partners; Dapeng Geology Museum in Shenzhen by lee + mundwiler; and Aarau’s New Bus Terminal by Vehovar & Jauslin Architects. The shortlisted future schemes are The Central Mosque Prishtina in Kosovo by MADe; Glass Butterfly in Holbaek by Form4 Architecture; and The National Music Centre in Calgary by Allied Works Architecture.

The ‘complex but finely formed’ National Music Centre in Canada straddles two roads linked by a pedestrian bridge. Its street presence captured the interest of Sandilands whilst Lee felt that it successfully ‘materialised the immaterial’ concept of music. The development includes the restoration of the historic King Edward Hotel. This idea of preservation seemed to resonate positively with the panel, who saw the importance of a ‘sympathetic relationship’ between the existing and new to ‘enforce each other’s strengths’ (Lee).

For that reason, even though Le Carreau du Temple was very popular amongst the panel and Suman Sorg appreciated the ‘very sensitive yet modern intrusions’, its failure to specify a single function left the judges feeling that, like so many ‘multifunctional’ buildings, it would remain predominantly functionless and vacant, cutting it short of the final shortlist.

However King’s Cross was a prime example of how the old and new can be bridged to create what Quinlan described as ‘impressive internal spaces’. He was the first to note the architectural feat, ‘the monumental task’ and the accomplishment it was to make Kings Cross station by John McAslan + Partners a significantly improved yet functional station that also brought the existing building to life.

As the Co-Founder of lee + mundwiler architects, Lee stepped out as Sandilands and Quinlan discussed the Dapeng Geology Museum. Striking images of the Museum in its surrounding environment left Paul feeling as though the form ‘emerged from the ground’. Stephen felt that the concept was visually very clear and noted that ‘ the dramatic forms actually reflect the function of the building’.

Repetition, hierarchy and differentiation were the moto for MADe’s Central Mosque Prishtina in Kosovo. The judges agreed that the design straddled an intriguing paradox between being ‘straightforward and architectonic’, yet also complex and ‘powerful’. 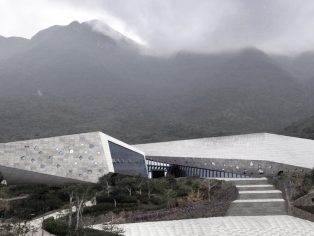 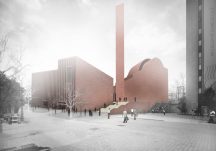