Sherborne House, Cannon Street is a multi-let property situated in the heart of London’s financial district. The surrounding area was initially the place of residence of the candle-makers, so Cannon Street first appeared as ‘Candelwrichstrete’ (Candle Maker Street) in 1183. The name was shortened over 60 times as a result of the local cockney dialect and settled on Cannon Street in the 17th century and is therefore not related to the firearms!

Clad in Portland stone, this historic office building has been the subject of a recent transformation. The building has received a new internal fit-out and external renovations and improvements have been made.

The design for the office space on the second floor was entirely open plan and a major issue was the ingress of the outside noise emanating from one of London’s busiest roads. It is often the case that offices are located near to transport links and in busy areas where outside noise levels are high, this can distract attention and make people less efficient at work.

When there is a cavity of at least 100mm between the primary and secondary glazing a reduction of 45dB is achievable. An additional benefit of secondary glazing is thermal retention, with the use of high performance twin seals, it virtually eradicates unwanted drafts and a U-value of 1.8 is possible.

Twenty1 Construction contacted Selectaglaze, to provide them with a solution to improve the acoustic insulation of the existing primary windows, which could not be replaced.

On completion of the building works a survey was undertaken for 17 new secondary glazing units from the slimline range. Both series 10 horizontal sliding and series 20 vertical sliding units were used.

The newly refurbished second floor offices are now an ideal environment to house a new occupier, thanks to Selectaglaze soundproofing the space against the road traffic noise.

Established in 1966 and Royal Warrant Holder since 2004, Selectaglaze is the leading specialist in secondary glazing. Purpose made secondary glazing is often the only way to introduce contemporary working and living environments into Listed, historic or landmark buildings. 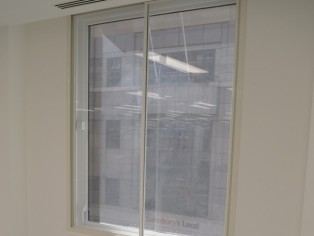