3D Repo, the company pioneering the use of cloud based design collaboration in 3D Building Information Modelling (BIM), has been shortlisted for a prestigious British Construction Industry Award. These Awards have been recognising excellence in construction for society for 30 years, and have the backing of the Prime Minister through the Prime Minister’s Better Public Building Award. The awards will be presented on 11 October at a gala dinner at the Grosvenor House Hotel in London.

In a year when a record breaking number of entries were submitted, 3D Repo, working with project partners Balfour Beatty and Vinci, was shortlisted in the category ‘Innovation in Product Design and Technology’. Using existing BIM 3D models and 4D plans with its cloud-based platform, 3D Repo is helping to improve worker safety on construction sites. As a result of the project ‘Virtual Reality for Zero Harm Training’, Balfour Beatty and Vinci had a zero accident rate on the project site.

Accessed via standard VR headsets, the 3D Repo simulation gave workers a 360 degree first person view of all the highlighted zones of potential hazards before they arrived on site. A user can walk freely within the site environment, teleport over large distances, interact with plant machinery and test their skills and appreciation of exclusion zones. Working alongside the M4/M5 Smart Motorway Scheme, more than 200 people have already experienced 3D Repo’s VR training programme. This scheme has already been awarded a Blue Star for innovation in safety by Highways England.

“We are excited to support 3D Repo in the next phase of its development,” said Richard Gourlay, Managing Partner at SPV. “We are at the early stages of a digital transformation of everyday management of design changes and project coordination across a network of contractors working on large infrastructure projects. 3D Repo is at the technological forefront of these changes that affect the design and construction industries, and we are thrilled to be able to support the continued commercial growth of the company.”

“3D Repo has secured high profile contracts, appointed Andrew Norrie as Commercial Director and released a new version of its BIM software,” said John Davis, Chairman of 3D Repo. “The latest funding will help us build on the successes 3D Repo has already enjoyed across the construction sector.” 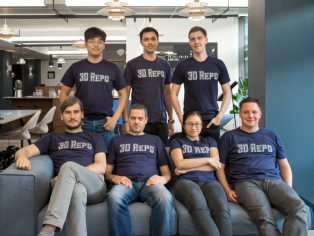