RDC, a world leader as an IT hardware disposal and computer recycling company recently purchased a former Crittall Windows factory in Braintree, opened by Margaret Thatcher in 1990. The building had been left empty for five years and was in a poor state of repair. Due to the nature of RDC’s business, it was essential for the building to be completely water tight.

Complete Projects CDM of Sheffield, a family owned and operated specialized construction business, who partner Dallmer Ltd. for installations of their SuperDrain siphonic rainwater drainage, was called in to upgrade the water drainage from the roof coordinated with gutter repairs. A quick but cost effective solution was essential.

Over the years there had been several attempts to eradicate leaks caused by gutters over flowing. These were due to drains wrongly located or added as ad hoc overflows instead of being integrated in the various siphonic systems. Pipework, originally installed with inadequate support was sagging in many places and had also been damaged by forklift truck misuse. Multiple leaks from around drains and from gutter joints were also revealed.

Complete Projects made a detailed survey and a recalculation of the flows in the different siphonic systems, using Dallmer’s latest SuperDrain siphonic drainage calculation programme. With this updated plan, fully compliant with BS8490 and meeting the requirements of the Siphonic Roof Drainage Association (SRDA), they then organised the replacement of the outlets in the gutters, synchronized with the gutter repairs, as well as the connection of new outlets to the revised and refurbished internal pipework.

For this work Complete Projects eventually used a total of fifty-four Dallmer D62 PVC flange siphonic roof drains, each one placed to match the re-calculated siphonic roof drainage system, properly fixed in the gutter and bonded to the lining.

The result was a refurbished system, which avoided the replacement of the internal pipework, a far longer and more expensive option. The client company RDC were able to hold the opening ceremony in June this year, knowing that they had a watertight roof over their heads, thanks to the skilful work carried out by Complete Projects and the high quality of the Dallmer roof drains. 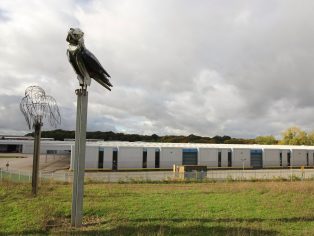