A funnel of light

A central London office regeneration sees a melange of Art Deco and Art Moderne reinstated and illuminated from within through a glass funnel. Sébastien Reed reports

The prow clock tower at No 1 New Oxford Street has long been a familiar feature of London’s ‘midtown’ streetscape. Designed by English-born, Swiss and French educated architect and planner Henry Philip Cart De Lafontaine as an ‘ultra-modern building of imposing appearance’ that exhibits a melange of Art Deco and Art Moderne styles, Commonwealth House – the building’s original name – was completed in 1939. Based on these design merits, the building had long been noted as a positive contributor to the local area’s cultural value. The scheme occupies the prominent nose of a tight corner junction where High Holborn meets New Oxford Street – “the gateway to the west-end”, says John McRae, director of Orms, the practice that led the refurbishment and extension to the building. Orms were approached after being recommended to client Nuveen Real Estate (formerly TH Real Estate) by office agency Bluebook on the basis of their considerable accrual of experience renovating commercial buildings, which include recent projects such as Medius House, Forum St Paul’s, and 160 Old Street. “The building had been held in various investment vehicles over the last 30 years – all managed by the Nuveen Real Estate team during that time – and more recently in a joint venture with British Airways Pension Fund,” explains McRae. As some of the office floors were becoming vacant, the architect’s first contact with the project was focused around how best to renovate a single typical floor of the building, in addition to repositioning the office entrance. McRae continues: “The ambition of the client was always to do a full refurb job, however the rental profile of the building had never been sufficient to support one.” Later, circumstances changed. The impending arrival of Crossrail triggered an increase of occupier demand and a hike in rental prices across central London – to the extent that a comprehensive refurbishment of Commonwealth House could be more seriously envisioned.

“We did the single floor study and then we were asked to do a feasibility exercise to examine the opportunities, should the entire building become vacant,” explains McRae. Over time, what was first intended to be a low-key interior renovation morphed into a brief to refurbish a large portion of the building. The perimeter of the building remains unchanged from its original footprint resembling a right-angle triangle, which occupies the tight corner – much like New York City’s Flatiron Building. In elevation, No 1 extends to 10 stories with an additional roof garden fitted with lift access. From basement upwards, the programme houses a cycle facility with storage and changing rooms, the ground floor is composed predominantly of retail spaces, in addition to the new full height office entrance and reception area on New Oxford Street. The first floor and upwards are devoted entirely to office space. Everything from ground-floor up to level six slab was retained from the original building: “What we did was remove level seven and level eight, then we rebuilt them to a larger footprint and added an extension to level nine,” says McRae, allowing for precious commercial floorspace to added to the scheme. Prior to the refurbishment, a light well cascading down onto an external courtyard housing lavatory facilities was situated at the heart of the building’s plan. Taking advantage of the existing form, with every further level heading upwards, Orms’ design gradually expands each floor further into the space on the eastern side, sculpting a full height, glazed “light-funnel” atrium into the scheme. A bank of four lifts and bridge decks were installed at the western side of the space, which extend the entire elevation of the scheme from ground floor to roof garden. In terms of structure, core samples of the concrete were taken to validate the loadings of the original building. The test results showed that the quality of the concrete was by no means optimal, precipitating some structural challenges given the plans to extend the building upwards and expand usable floorspace inside. The removal of the 7th and 8th floor slabs and roof slab allowed for the construction of new steel floors, including an additional floor and new roof terrace. The partial infill of the atrium was achieved with a new steel frame inserted into the courtyard, along with new reinforced concrete lift cores. The retained concrete beams and columns to the lower levels were strengthened using steel stiffening plates and angles. This required temporary propping throughout the lower floors and added further complexity to the construction. In light of the added floors, the architects also had to develop a solution to sensitively make the extension look like an integral part of the building. McRae comments: “Part of what we did was tinting the whole facade from the first floor to the eighth, to make it look like an original composition.” In addition, new stonework was carefully added to complement the chromatic alterations. What became apparent as the architects studied the original marketing brochures of the building was that the elevation facing New Oxford Street was designed to be more Art Deco inspired, while the High Holborn elevation seemed to draw influence from the Art Moderne aesthetic. In addition to these stylistic references specified in Lafontaine’s original designs, the architects uncovered proposals for hexagonal glazed green tiles to clad the building. The tiles were not permitted by Sir Giles Gilbert Scott, the architect advising the Crown, who perceived them to be too innovative at the time. Breathing Lafontaine’s legacy back into the building, Orms reinstated the tile design using pyrolave tiles – volcanic stone extracted from a lake in France and hand glazed to produce the chosen emerald colour. Portland stone skirts the building’s ground floor level facade below the tinted brickwork cladding above, acting as a canvas for further bands of hexagonal emerald tiles decorating the facade towering over New Oxford Street.

As with any commercial office space, ensuring that interior spaces are sufficiently illuminated was key to the project. This is achieved in practice through the new glazed atrium, which allows natural light to fill the building’s interiors, as well as providing an inspiring entrance to users as they approach the reception. “Laminated safety glass was used for the atrium and towards the nose of the building the atrium’s corners are curved, allowing the softness of art-deco and art-modern to be played out,” says McRae. Given the combination of No 1’s busy urban location and the wellness requirements of offices, the architects had to design sensitively to shield users from noise, as McRae remarks: “The upper floors have been fitted with new glazing that we specified on the basis of their U-values and acoustics due to the heavily trafficked roads below.” The ground floor retail units are installed with a series of single-glazed panels with curved edges; “we wanted to reinstate the Art Deco style in the shop fronts,” says McRae. Upon examining photographs of Commonwealth House from the 1930s, the architects discovered that the iconic nose of the building originally featured single-glazed curved panes on each floor, which were later replaced by faceted glass in the 1960s. Following Orms’ refurbishment, the glass was again substituted for double-glazed curved panels. “Because the glass is curved, the two panes have two different radii. There’s a great deal of complexity in making sure that each pane fits within the other,” explains McRae. In order to achieve the horizontal aesthetic of Delafontaine’s 1930s design, spacer bars were fitted within the cavity of the double glazed units, and cosmetic bars were fitted to the outside of the glass to replicate the horizontal window divisions. In the central bay of the New Oxford Street entrance, “there are extremely tight glass corners of around 250 mm – one of the tightest that you can achieve with double glazing,” according to McRae. Through trial and error, Spanish curved glass specialist Cricursa were able to produce the desired curvature, but not without slight distortion of the glass. In discussion with the planners, it was made clear that the curved corners from the original design had to be retained so the architects had to run with the distorted effect on the glazed corners.

Internally, again No 1 nods to the Art Deco and Art Moderne periods. The architects used solus stone for the reception floors and fluted glass – essentially a profiled glass manufactured using original 1920s methods. “It gives a really lovely texture. Rather than being a smooth flat surface, it has a series of concaves and shells.” Other interior materials include brass on the reception desk, and dark stained oak as references in keeping with the Art Deco period. The significant use of black for trims and horizontal features, were inspired more by the Art Moderne movement. “We were using findings from our research into the Moderne and Deco styles to create our new aesthetic,” says McRae. Maximising the building’s sustainability potential was also a priority. Bicycle storage facilities, photovoltaic cells at the top of the building, and a localised air source unit on each floor in each corner of the building – meaning that air can be cooled locally when required, rather than centrally – are some of the features that contribute to No 1’s BREEAM Excellent rating. The attention to detail has already secured the client two key tenants; fashion retailer COS, whose relationship with the scheme began on a prelet basis before its completion, and technology brand Twitch. The office spaces are light and airy, with plenty of flexibility designed in as well as a range of outdoor spaces. Altogether they demonstrate Orms’ sensitivity to the diversity of potential activities and brands that might set up shop at No 1. 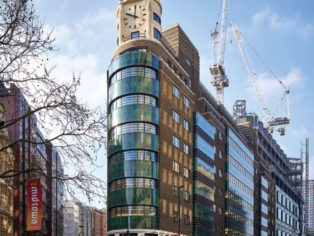 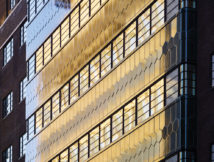 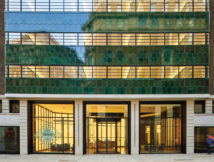 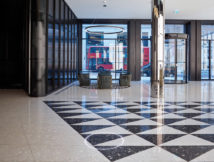 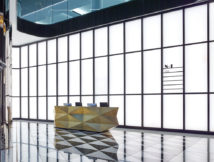 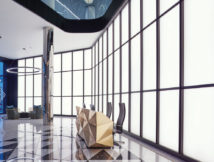 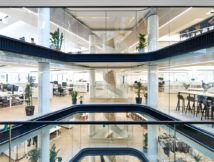