Space Group are pleased to release images of their innovative 144-unit large housing scheme in China.

The project site is part of the master planning scheme of the Huayan Township, located in Ruichang. Whilst it is located in an urban setting, its aim is to provide value due to its visual aspects and bring happiness to its occupants. Various sustainable aspects are at the core of the design concept.

The Mountain is not a building in a conventional sense: in keeping with its surrounding context of the Flower Ocean Garden it is a landscape; a green veil that can be explored. It is an urban park where one can relax, play, exercise, even climb – but also live in.

However, this extensive greenery is not just a gimmick: apart from the aesthetic response to its special setting it also fulfills a number of sustainable aspects. The extensive greenery creates an enhanced micro-climate, absorbs carbon dioxide, limits solar gain, allows for a better acoustic performance and is designed to provide a healthy and inspiring living environment. A walk-on green roof should encourage inhabitants and visitors alike to go for a hike for sports and recreation.

Deep balconies and wide circulation walkways provide amenity and communal interface spaces whilst they shade the floor beneath them. Built-in planting to these provide additional shade to the floor-to-ceiling glazing behind.

A large and densely-planted central courtyard provides an attractive outlook that regulates the local temperature. The result is that there is more green than built-on area. The Mountain becomes a destination itself.

Other aspects of ‘The Mountain’ follow a similar nature-inspired narrative. These include a solar gain-preventing façade featuring an abstracted Mount Lu.

The aim of the built volume is to acknowledge the existing master plan and therefore its likely surrounding massing. The view towards the Flower Ocean Garden is a crucial aspect for both the orientation and the massing. It is for these reasons why the volume has been arranged as a ring which is open to the southern side. The volume features a distinctive peak in the north-western corner. This arrangement enables the volume to be thinner than suggested in the master plan leaving more space for a vast communal courtyard. An emphasis is put onto the strong grid of the master plan with the bulk of the volume arranged along the north. This also provides a screen against its neighbours. The distinctive kink in the plot has been highlighted with a theatrical slope which is the inviting main access onto a park on the roof.

The layout of the individual apartments and the entire building volume allows for an uninterrupted view towards the Flower Ocean Garden for the majority of the apartments. As explained in addition to that ‘The Mountain’ wraps around a central communal courtyard called ‘The Forest’. All circulation is arranged so that these principles are undisturbed. Dramatic openings are ‘ripped out’ of the façade to provide crystalline-like entrances. Glazed stair and lift cores enable an outlook onto ‘The Forest’.

There are four entrances in total allowing for a free flow into and through the plot. Letter boxes, service shafts and rubbish shoots are located close to the lift cores for convenience.

The central courtyard is heavily planted in order to continue the green concept described above. Its foliage provides a natural visual and acoustic screen between the apartments and a pleasant outlook. Its extent assists to cool the building locally during the warmer months. Within the forest one can find a so-called Water Mountain, a clearing and a cabin.

The Water Mountain
This artificial mountain can be climbed on but also provides an opportunity to conceal the ventilation to an underground car park if one was required.

The Clearing
Hidden away in the tense trees is an open space which is available for communal events. The area is to be left flexible to allow for BBQs, plays, etc. It could also simply function as a gathering place for groups such as children from the nearby new kindergarten before they are led off to explore the fauna and play facilities of ‘The Mountain’.

The Lodge
Similar to the clearing one can also find a cabin. It enables communal functions sheltered from the elements. When not in use it can simply be left open as a hide away for children. It also provides WC facilities for the ‘forest explorers’.

Mount Lu is a UNESCO World Heritage site that attracts more than 10 million visitors per year. It is considered as one of China’s holiest mountain ranges. Apart from its natural beauty its surroundings also contain significant cultural heritage including important architecture. Many of its steep peaks are above a dramatic sea of misty clouds that encompass the mountains for half of the year.

The exterior of the building is wrapped in a floor to ceiling curtain wall façade. It is a secondary, single glazed screen on the North and West sheltering the circulation walkways and triple glazed windows in the East and South enabling uninterrupted outlooks. In order to prevent solar gain the glazing has a silk-screen pattern applied to its surface. It is black and white on the outside and black on the inside. This ceramic ‘frit’ has a dot size of just 2-4mm which means that it is not noticeable to the human eye as soon as one stands half a metre away from the façade when viewed from the inside.

The millions of small dots create an image that stretches over the entire façade on all four sides of the building. The image is an abstraction of a drawing (Lofty Mount Lu) by Shen Zhou of the nearby Mount Lu.

The created image varies in its appearance depending on the viewer’s distance and viewing angle towards the building: At times one can make out the scene of a landscape whilst sometimes the envelope just appears to be a haze. – It is also this very haziness that is typical for the area around Mount Lu.

Façades
Despite the extensive use of external glazing solar gain is prevented in various ways: A ceramic ‘frit’ to the glazing of the street facing façades, called ‘Mount Lu2’ (see above), drastically limits heat gain whilst allowing uninterrupted views. On some elevations this type of glass comes in the shape of a secondary glazing in addition to the solid walls with windows and doors behind whilst on others the pattern is applied onto triple glazed units. On these and the other, courtyard facing elevations, deep balconies and walkways from the floors above provide additional shade. Dedicated extensive planting is built in to offer further shading.

Solar panels
The overall scheme provides extensive balconies and as such the glass balustrades have been utilized to double in their function: A seemingly semi-transparent grid of solar panels has been integrated into the balcony glazing. This approach also enables additional shading and provides privacy.

Wind farm
A wind farm consisting of three turbines is allocated on north-eastern corner of the roof – the most wind exposed area of the building. Each turbine is supposed to be of the tall and slender type. Its individual blades are to be made of mirror polished stainless steel which will enable them to flicker intriguingly in the sunlight as they spin as if they were flags. The farm sits proudly allocated so that it is visible from various angles.

Greenery
The extensive integral foliage of the scheme, which can be found on the ground, on the roof, on the balconies, throughout the circulation spaces and on vertical walls, has a significant impact on the sustainable credentials: There is a noticeable reduction of thermal loading on the building fabric. By reducing reflected light and heat there is a mitigation of the ‘Heat Island’ effect. It creates an ecological micro-climate for the benefit of the urban ecology. Pollution can be countered thanks to the air filtration of carbon dioxide and volatile organic compounds. Noise attenuation from the in- and outside can be expected. Plus the greenery has also the potential to offset the building’s carbon footprint.

Water harvesting
As part of the green roofs mentioned above there is also an integral rainwater harvesting system proposed. This can be utilized to automatically maintain the planting but excessive water can also contribute to flush ecological toilets. 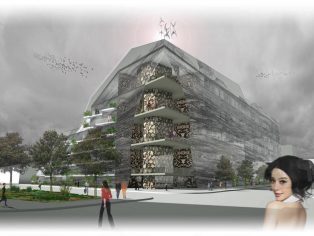 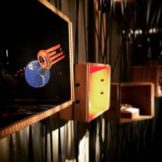