Finalist teams will now receive a further briefing and create concept designs that will be revealed to the public and stakeholders in an exhibition in April in Adelaide, and online, before the competition jury meets in May 2018.

The architect-led teams were the unanimous choice of a selection panel that included representatives of Arts South Australia, the Art Gallery of South Australia and the Office for Design and Architecture South Australia, and which was chaired by the competition jury chair Michael Lynch AO CBE.

The teams (joint partnerships in alphabetical order by lead consultant with full details in Notes below) are:

The conditions for stage two of the competition have been formally endorsed by the Australian Institute of Architects. The full competition jury is currently being confirmed, and will be announced in early 2018.

The first stage of the competition attracted 107 teams made up of circa 525 individual firms from five continents. The global call for interest was designed to encourage Australian as well as leading international practices – a condition of the competition is partnership with an Australian practice at stage two, which has already been fulfilled by the shortlisted teams.

A new landmark on Adelaide’s celebrated North Terrace boulevard, Adelaide Contemporary will combine a contemporary art gallery with a public sculpture park and meeting place. The initiative will be a focus for the city’s cultural energies and create an accessible community meeting place, integrating art, education, nature and people.

“The global interest in the competition is a vote of confidence in Adelaide Contemporary and a heartening indication of Adelaide’s standing worldwide.

“The selection panel had the toughest call – to sift just six teams from a very strong field.”

“This is an extraordinarily rich list of diverse creative partnerships of architects looking to complement their talents by working with both peers and smaller talented practices. The final decision was very demanding but these are the teams that convinced us through the outstanding quality of their submissions.

“There is a strong thread of Australian professional expertise running through the entire list with Australians taking both equal and collaborative positions.

“The six teams all showed a strong connection with Adelaide – and understood that our aim is not to create an off-the-peg architectural icon but a piece of Adelaide, an entity that will be sustainable and polymathic in the way it enhances the social, cultural and architectural fabric of the city.”

“It is inspiring to see how architects have taken collaboration to heart. If there is any sure route to creating today’s sophisticated cultural buildings then it is by selecting a team that prizes flair and cooperation.

“We are extremely grateful to all those who entered the competition and hope the experience will help them in their future practice.

“Now we look to stage two of the competition and the brief for this unique art destination, which asks for a memorable building, physically and emotionally woven into the place and community. The teams have sixteen weeks to produce their designs and these will go on show to the public in April 2018.”

The competition brief embraces South Australia’s Industry Participation Policy, to ensure that maximum economic activity is generated locally from project conception through to delivery; and to provide new opportunities for local producers, entrepreneurs and businesses.

The competition will inform the finalisation of a business case and funding approval by the Government of South Australia following the brief development phase.

Adelaide is located on the traditional lands of the Kaurna people and the project site – part of the former Royal Adelaide Hospital site – and its surroundings are rich in Kaurna heritage.

The former Royal Adelaide Hospital site, close to the historic Adelaide Botanic Garden and to the acclaimed Art Gallery of South Australia, will undergo a transformation into an innovative, mixed-use contemporary urban quarter, led by Renewal SA, the Government of South Australia’s regeneration agency. Adelaide Contemporary is a key element in the emerging vision. 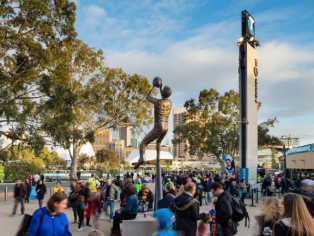