Al Jazeera’s new series ‘Rebel Architecture’, premiering 18 August at 22.30 GMT (23.30 BST) uncovers the architects who are shunning the glamour of ‘starchitecture’ and using design to tackle the world’s urban, environmental and social crises.

The series of six half-hour documentaries features architects from Vietnam, Nigeria, Spain, Pakistan, Israel/Occupied West Bank and Spain who believe architecture can do more than iconic towers and luxury flats.

“This series challenges our conceptions of architecture and design, and the way we cover them in the media. With surprising and inspiring stories from all over the world, it’s completely unlike any other programme on architecture.”

In 2010, the world’s urban population peaked, finally outweighing the number of people living in rural areas. But this seismic change in habitat has coincided with soaring pollution, a spectacular rise in global inequality, and the explosive growth of informal settlements. The six architects profiled in Rebel Architecture are willing to tackle these problems head on, even if it means being cast out by the architectural establishment.

Spanish architect Santi Cirugeda, who operates at the edge of the law, occupying municipal land to self-build public spaces, said:

“In contemporary architecture, people are always concerned with ‘what a beautiful building’ or ‘what a pretty project’ – that’s… ; architecture should be about something more.”

“When we train, we are taught that architecture is like God because you create things. As a result, your ego is inflated. You think no-one else can do what you’re doing.”

Lari once designed glass and steel behemoths like the Pakistan State Oil Building. But when disaster struck in 2010, and foreign aid failed to materialise, she turned to traditional techniques to design flood and earthquake proof buildings for people in remote regions.

Israeli architect Eyal Weizman has a radically different approach to the profession;

“Architecture and the built environment is a kind of slow violence, designed to strangulate Palestinian villages and towns…the crime was done on the drawing board itself”, says Weizman. But like each of the six architects feature in the series, he sees the solution in architecture. “When violence is enacted through architecture, architecture must somehow rise to resist it.” 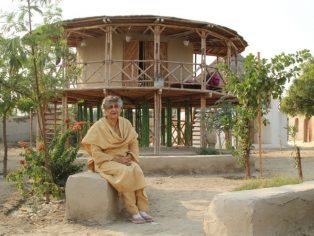