Alan Braybrook, Sontay’s Business Development Director and one of its longest serving employees, was honoured this month’s Building Controls Industry Association (BCIA) Awards. Alan collected the Outstanding Contribution of the Year award at the prestigious event, which took place on Thursday 10th May at the Hilton Birmingham Metropole.

Alan is well-known for the knowledge and experience he brings to the building controls industry. He has been with Sontay since 1997, starting as Northern Sales Manager and progressed through the company to his current position of Business Development Director. His commitment and passion for the industry are one of the many reasons why Alan is held in such esteem by his contemporaries.

“Alan has dedicated his whole working life to the HVAC market. After joining a number of successful players within the industry, he has risen through the ranks of Sontay over the past 20 years, having been UK Sales Manager, Sales Director and now Business Development Director. He has been instrumental in the transformation of Sontay from a catalogue company to a technical solutions provider well established on the international stage. Alan is widely known and respected by all equipment manufacturers, distributors and system integrators of our industry and has often been called “Mr Sontay”. It is pleasure to work with him and I am delighted that he has been honoured by the BCIA, it is a thoroughly deserved award.”

“From the moment I joined Sontay, Alan has always been a source of support and inspiration to me. He is truly dedicated to our industry and no one deserves an outstanding contribution award more.” 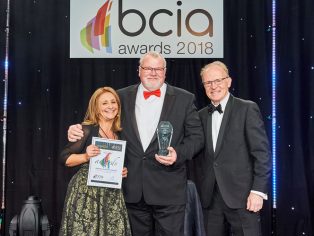