Anaerobic digestion plant expansion sees the best of everything!

Renewable Heat UK saw a number of opportunities in the project and with the support of Wilo products, set about introducing new elements to the existing system to show huge improvements in the systems’ output. The newly expanded system saw the inclusion of nine energy saving pumps – Wilo Yonos-MAXO and Wilo Stratos models – that are amongst the most energy efficient pumps on the market.

The new improved anaerobic digestion system offers a raft of benefits that are all making a huge difference to the farm. Now all organic matter produced on the farm can go directly into the digester. This includes cow muck, old bedding, old feed, hedge clippings from around the farm and any other organic matter generated. The system draws methane off the top of the system using it to fire an engine generator that generates 250mW of electricity – 10 per cent of which powers all the electricity required by the farm with the other 90 per cent going to the grid – producing enough electricity theoretically, to supply a small village. The engine in the system has no radiator – it directly heats a large header tank to dissipate the heat, and this water is then pumped around the site using the Wilo pumps to share the heat across the site.

The low methane slurry that is the waste product of the anaerobic digestion can then be spread on the fields, benefitting from an 80 per cent reduction in smell as a result of the anaerobic process that has resulted in a major reduction in complaints from the farms neighbours. In addition the fertiliser is activated far more quickly on the fields after digestion, rather than having to lie on the fields for some time waiting to start the assimilation process.

But the benefits don’t stop there. The heat generated by the system’s engine sees the drinking water for the cows heated to 30 degrees C which has resulted in an 8-10 per cent better milk yield and the cow shed is heated to 20 degrees C resulting in faster growing, healthier calves on the farm as well. Healthier animals require far less antibiotics, reducing cost and other fears regarding the long term use of such drugs on animals which contribute to food supplies for human consumption. The cows also benefit from better quality feed as in the past feed was put out and left for the cows to eat. Now fresh food is put out every day and the old feed goes into the digester.

Rob Ridley says the partnership with Wilo has paid off handsomely:

“We were delighted by the help Wilo was able to provide and the farm is benefitting hugely from the newly extended anaerobic digestion system. It’s a model for livestock farms across the UK that could be benefitting from a similar holistic approach to raising stock, maximising milk yields, generating high quantities of electricity, much of which goes to the grid providing additional income for the farm. It’s not just a win, win situation it’s a ‘win to the power of four or five situation’ when you step back and take a closer look at all the benefits the system offers the farm.”

“We were delighted to be involved in the project”

“It’s always rewarding to be involved in a project that offers something slightly different, and the success of this one is far reaching and offers serious opportunities for other livestock farms to learn from the installation and to benefit from additional income streams.” 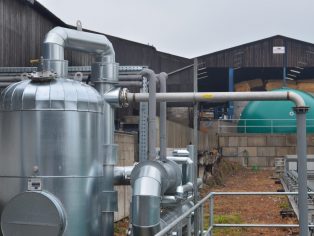 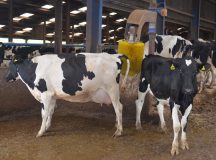