A leading wholesaler has kick-started its 130th anniversary by offering one lucky artist a £10,000 commission to produce an eye-catching and commemorative sculpture.

F.H. Brundle has announced plans to run a sculpture competition to mark its milestone birthday as well as dedicate the artwork to the memory of Richard Brundle MBE, a former partner in the family-run business.

The winning sculpture will reside in F.H. Brundle’s new distribution centre in Burton Upon Trent with the competition open to artists, fabricators, blacksmiths or anyone working with metals.

“We are very proud to reach this fantastic anniversary and we wanted to mark it in a special way.

“We have a passion for the industry and we are constantly amazed at the talents of our customers. We thought this would be an ideal way to celebrate our 130th anniversary.”

The internal freestanding sculpture must be constructed from the artist’s choice of materials from F.H. Brundle, which will be supplied free of charge up to a maximum of £1,000 in value.

It will act as a lasting memorial to Richard Brundle MBE who started working for the family business in 1956 and helped guide and grow the company into the modern era before he passed away in December 2017.

“Richard was not only an astute businessman, but he always wore a smile and was liked and respected by customers and staff alike. We thought a sculpture would be a fitting and permanent tribute to everything he did for our company.

“This competition is a great opportunity for someone to create an original piece of work, from the many thousands of products we sell. Key to winning this commission will be an imagination, creativity and skill in using the products of F.H. Brundle in the finished design.”

The deadline for outline proposals is Friday 15th March 2019 with a shortlist of candidates drawn up by the end of March.

The winner is due to be announced on Monday 3rd June and will be decided by Michael Brundle, owner of F.H. Brundle, and his management team.

To find out more about the competition, please visit http://blog.fhbrundle.co.uk/2019/01/18/sculpture-competition/. 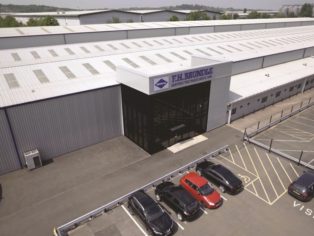