Another building on ye olde Knightriders Street, gets the Selectaglaze treatment

The City & Guilds Group helps people achieve their potential through work-based learning. Granted a Royal Charter in 1900 by Queen Victoria, The Princess Royal is the Groups’ current President, who took over from her father The Duke of Edinburgh in 2011.

The City & Guilds Group have always worked closely with industry and adapted to changing technical, social and economic trends to anticipate and fill skills gaps. The earliest exams ranging from cotton and steel manufacture, to telegraphy and qualitative blowpipe analysis – all relevant qualifications in the 18th century!

The Grade II Listed Head Office is situated on the corner of Giltspur Street and Cock Lane in Smithfields – The City of London with St Bartholomews Hospital directly opposite (another building which Selectaglaze has worked in).

The company approached Selectaglaze, the leading provider of secondary glazing, for a cost effective window upgrade to all floors of their Head Office which overlooked the building site. This was to ensure a more amenable working environment, thus achieving a high level of noise attenuation.

51 units were installed, including; Series 42 fixed lights, Series 45 and 41 casements, Series 10 and 15 horizontal sliding units, all designed to suit the existing fenestration.

Employees at the City & Guilds Group have been very impressed with the level of sound attenuation received and it has made the working environment across all the office floors far more peaceful.

“We were very impressed with the installation and quality of the products supplied by Selectaglaze. There was little supervision required, the workmanship was excellent and they left the site in an immaculate condition”.

Selectaglaze is the leading specialist in the design, manufacture and installation of secondary glazing; established in 1966 and a Royal Warrant Holder since 2004. It boasts a range of extensive products to suit all projects from Listed properties to new build hotels. 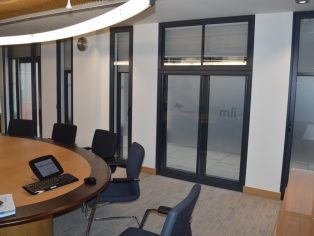