Antrax IT at Bologna Water Design 2014 with Daniel Libeskind

Once again this year, from the 22nd to 27th of September, Bologna Water Design took place, for an unmissable ‘post-trade fair’ event dedicated to water design, that is both a part of and complements Cersaie.

The event, which has been in its third year, offered exciting installations, projects and appointments that analysed the theme, interpreting it in a prevalently artistic key, but also from the point of view of architecture, design and ecology. Bologna Water Design therefore became a true discussion forum in an amazing setting – the Ex Ospedale dei Bastardini – where the energy and ideas of both up and coming and well known designers and artists blended in a calendar of exclusive appointments and events.

Daniel Libeskind has been once again a protagonist of Bologna Water Design and, for this edition, in partnership with Antrax IT, he has created an enigmatic and contemplative installation at the heart of the event.

For the first time at Bologna Water Design, Antrax IT created a direct relationship with Libeskind and interpreted his thoughts, giving shape to Geometric Fragment, a sculpture that is a totally spontaneous, real and silent reflection on the development of modern European architecture.

Geometric Fragment, designed by Daniel Libeskind and produced by Antrax IT, is the fragment of a sphere entirely made of metal. The work emerges from a thin layer of black oil, from which it absorbs and reflects the light, transforming it into a plastic, dynamic, living object. 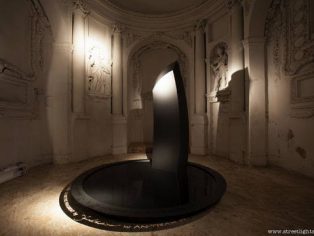