Approval given for nine affordable homes in Christchurch

The construction of nine new affordable homes on the site of an old community centre in the Somerford area of Christchurch has been given the go-ahead.

Sovereign Housing Association’s plans to provide the nine homes on the site of the Somerford Community Centre, on the corner of Southey and Amethyst Road, was approved by Christchurch Borough Council planners on 13 August.

The plans were drawn up by Christchurch-based Aspire Architects in close consultation with a design group including Somerford residents and local councillors.

As part of the plans to develop the old community centre site, Sovereign has funded the refurbishment of the former United Reformed Church on Southey Road and has transferred the lease to a residents’ committee. The new community facility was officially opened in June.

“We are really pleased that we have passed another milestone in our efforts to improve the provision of affordable homes in Somerford.

“We’ve worked hard with Christchurch Borough Council, local councillors and residents to ensure that the homes we are providing meet local housing needs, and we were pleased with the overwhelmingly positive feedback we had for this development.”

Twenty-seven affordable homes that Sovereign is building at nearby Scotts Green are nearing completion and should be occupied by the end of the year. 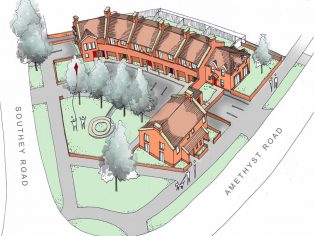