A solar energy scheme at a sustainable housing complex in Moray has bagged a prestigious award for a Glasgow architect.

John Gilbert Architects were handed a new award, in honour of the late Scots solar pioneer Kerr MacGregor, at the 2013 Scottish Green Energy Awards, organised by Scottish Renewables and held at the National Museum of Scotland in Edinburgh.

John Gilbert and Matt Bridgestock of the company were recognised for their work on the Duneland Ecovillage in Findhorn, Moray, where affordable heat is delivered through solar and heat pump technologies.

“We are delighted to have won this prize for our project at East Whins in Findhorn as we are firm believers in the potential for solar energy in Northern Latitudes. This was something that Kerr MacGregor championed, that in Scotland, we have a longer heating season than much of the UK and can benefit from energy gains even when the light is low.

“We would like to see the day when all of Scotland’s houses (new and old) make use of solar energy and see East Whins as one example of what can be achieved.”

The houses are orientated to take most benefit from the sun, with roofs angled so that locally-made solar thermal panels gain most benefit, and sunspaces make best use of the solar gains in low light. The houses are well insulated, with heating provided by an air source heat pump driven by electricity from Findhorn’s own wind driven electricity supply.

The head of Scotland’s European Marine Energy Centre and a groundbreaking local authority were also among those honoured at the awards.

Fife Council – which has encouraged the construction of the world’s largest and most powerful offshore wind turbine in the coastal town of Methil – received the prestigious Public Sector Initiative Award at the ceremony, organised by Scottish Renewables and sponsored by RWE npower renewables.

Neil Kermode, Managing Director of the European Marine Energy Centre, picked up Outstanding Contribution to the industry for his work promoting wave and tidal energy and helping Orkney, where the centre is based, earn the nickname of the ‘Energy Islands’.

Others celebrating at the ceremony, held at the National Museum of Scotland in Edinburgh and hosted by comedian and BBC Radio Scotland presenter Fred MacAulay, included FoundOcean, whose innovative offshore grout boosted the business from an income of zero to £12.9 million in just three years, and the locally-owned Neilston Community Wind Farm.

“This year’s Scottish Green Energy Awards were our most competitive ever, and with good reason. The strength of the industry in Scotland was reflected in the calibre of nominations which we received for the awards, and the diversity of the shortlist showed just how important the renewables sector is increasingly becoming in providing employment and investment across the country.

“Our congratulations go out to John Gilbert Architects, whose strong entry and subsequent success show they are just the kind of organisation Scotland’s renewables sector needs in order to continue to flourish.”

Fife Council’s dedication to renewables as an economic recovery mechanism has extended from the authority’s Renewable Energy Routemap – a Scots first – to the Fife Renewables Innovation Centre, Methil, which is now home to a 7MW (megawatt) offshore test turbine developed by South Korean electronics giant Samsung.

The Neilston project, a 10MW, four-turbine wind farm in the East Renfrewshire town, is 28% owned by local people. Its operation will ensure a 20-year income stream to fulfil plans laid down in the community’s 2009 Town Charter.

FoundOcean’s spectacular success was sealed with the Scottish Green Energy Business Growth Award. The Livingston business shattered a monopoly by developing an alternative cement for offshore installations, driving the business to a 38% market share in 36 months and boosting staff numbers from 39 to 134 since January 2010.

Diageo Scotland fought off stiff competition to win the Best Project Award for a scheme in Charlestown-of-Aberlour, Moray, which uses a bio-energy plant to produce energy from waste.

SSE’s Open4Business Highlands and Islands Portal was awarded the Contribution to Supply Chain Development Award for a procurement system which has attracted 800 businesses and awarded £2 million of contracts.

Fergus Ewing MSP was named Best Politician for his commitment to renewables, while Neil Evans, environment correspondent at Holyrood magazine, was named Best Journalist for his work covering many aspects of the industry in Scotland. 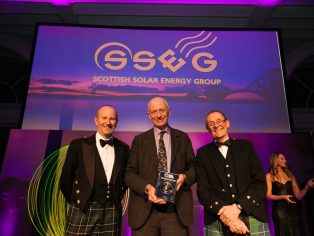