Supported by a 50 percent grant fund from the Welsh Government’s 21st Century School Programme and 50 percent coming from the Council’s own resources, the development is one step of the Council’s ambitious programme for school improvement. The new ‘all-through’ (3-16) school brings together the successful comprehensives of Cwrt Sart, Glanafan and Sandfields with Traethemelyn Primary School: providing 1,100 secondary and 300 primary school places and bespoke, fully integrated facilities for 100 pupils with additional learning needs.

The school will be at the heart of the local community: giving the community access to sports facilities and other areas in the building for academic and vocational purposes, as well as performance spaces, meeting rooms, conference and recreation facilities.

Currently under construction with Bouygues as the main Design Build contractor, the building sits on a very flat and exposed site due to its proximity to the Bristol Channel. Stride Treglown developed a design that responds to the former rolling sand dunes and surrounding hills; the roof of the building rises and falls as the storey heights change, reflective of the sloping roofs of traditional Welsh valleys terraced housing as they ‘climb’ local hills.

“We saw landscape as a key enabler in both dealing with the site’s exposure to wind and helping this landmark building blend more easily with the surrounding landscape. As such, we introduced sculpted earth mounds at each end of the building, formed so that they align with the rising roof that encompasses the school and allows the building and landscape to be read as one, rising out of the flat terrain.”

In addition to acting as wind breaks, these earth sculptures help to retain much of the soil from the construction and so enhance the existing biodiversity. Further earth mounds have been added to screen the car parking areas, as well as to form elevated areas for spectating sports and drama performances.

As the school will bring together pupils from three local communities, the Architect developed a layout for all pupils to arrive at one point: the large central hub space. All pupils will start their school day from the same point within the school, irrespective of which direction they have travelled. Two thirds of the pupils will arrive at the north end where they will enter directly into a well-sheltered courtyard which is surrounded by a feature glazed screen with coloured panels that replicate the colours of wild flower meadows. Both working and social spaces have been designed to promote a positive effect on behaviour, attitude and well-being.

In line with the 20:20 Vision Report to Government in 2006, it is anticipated that all teaching subjects move away from the more conventional learning spaces into more informal personalised learning areas for large group work, collaboration between subjects and wider group activities. In response to this vision, the school layout will be adaptable and versatile, with a standard cluster of 10 classrooms per wing and standard vertical services and circulation elements at each end. Heavily serviced rooms are at ground floor level, with science rooms on the top floor. In between are all standard classrooms so that the practical and scientific subjects have an easy and direct access to standard class spaces for more formal teaching activities. 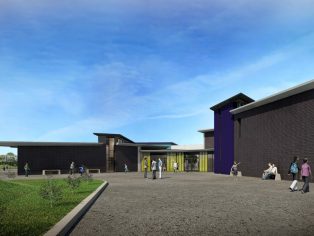 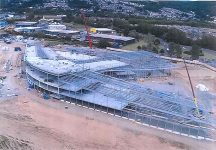