Architects maber celebrated the tenth anniversary of their Leicester office with a VIP tour of one of their latest projects in the city – the restoration and refurbishment of the Great Hall of Leicester Castle.

The firm’s roots go back more than 30 years, and it employs 70 people across five offices in the Midlands and London. Since the Leicester office opened in 2007, it has grown to employ ten people in the city and has been responsible for some of Leicester’s best known buildings and architectural projects.

Ian Harris, a director of maber who heads the Leicester office, said: “Two huge reasons for our success are long-term relationships with clients and the talent of our people, so it was great to bring everyone together to celebrate in an amazing space.”

Guests at the tenth birthday party toured the newly-refurbished Great Hall, thought to be the largest medieval hall of its kind in Europe. Converting it into a new Business School for De Montfort University brought together a wide range of the practice’s skills, including architecture, interior design, landscape design and conservation.

Part of the hall, once used as a Crown Court, retains the gothic Victorian furniture, including the judge’s chair, dock and jury benches, which must rank it as one of the most unusual university teaching spaces in the world.

Some of maber’s other major Leicester projects include:

Originally formed in 1983 in Nottingham, maber now also has offices in Birmingham, Derby and London as well as Leicester. A multi-award-winning architectural practice, it specialises in education, sport, industrial, leisure, culture, residential, workplace, commercial and health.

As well as touring the Great Hall, birthday celebration guests also experienced some of maber’s latest technology, including virtual reality, 3D design and 3D printing as well as Indian snacks and a slice of birthday cake. 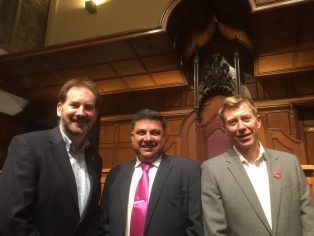 Left to Right: Ian Harris, a Director of maber and head of its Leicester office, Umesh Desai, Director, Estates & Commercial Services Directorate, De Montfort University, and Mark Hobson, Managing Director of maber, pictured in the newly-refurbished Great Hall of Leicester Castle where a former Victorian courtroom has been repurposed as a university lecture theatre.