NW Systems Group’s Streamdays 2 and RemoteManager video streaming and video monitoring & recording services have been selected by one of the UK’s most respected property development groups, Argent LLP, to provide live and recorded images as one of London’s largest redevelopment projects ramps up.

NW Systems has so far installed three high resolution fixed network cameras and two Pan Tilt Zoom (PTZ) cameras on the top of two buildings within 67 acre redevelopment zone around London King’s Cross station. A total of five network cameras have so far been commissioned to provide overhead views of the site and six further cameras are planned. They will witness the redevelopment and construction of more than 50 buildings over the next 10 years.

The King’s Cross project is one of the largest and most ambitious construction projects in the Capital right now. Once completed, it will provide 10 new public squares, 20 new streets and 2,000 new homes. Over 45,000 people will study, work and live in the area. It is already home to the new University of the Arts, London (also called Central St Martin’s) which has a capacity for over 5,000 art students. Google’s UK headquarters will also be built to the west of the site.

NW Systems has installed two AXIS P5534-E PTZ cameras, the first cited on top of King’s Place at 90 York Way and the second on the roof of the newly developed Arthouse building. The latter camera forms the first of a total of four cameras which will provide images of the new Google UK headquarters during its construction which has just started.

Two fixed AXIS P1346-E have also been installed on the roof of King’s Place and one further fixed Mobotix M24 cameras on the top of the Arthouse building. High resolution images from all three static cameras are being archived to NW Systems’ RemoteManager servers and will be used to create time-lapse videos of specific aspects of the construction.

Images from selected cameras are simultaneously being streamed using NW Systems’ Steamdays 2 live streaming service. The results can now be viewed at www.kingscross.co.uk/webcam. The project site is supported by a busy social media communications space on the same site. This website is designed to stimulate engagement and meet the public’s interest in this gigantic development.

“We live in an age where real-time video is increasingly influential. The public can control our (web) cameras which provide a bird’s eye view of the development at King’s Cross. Streaming video is one of the digital tools successfully used to change the public’s perception, inform the pace of change and highlight the fantastic events programme being played out. We are proud of our social media following. The cameras and their public operation provide a great way of fuelling interest for the most important development site in central London.”

“We had more than 20,000 hits to the live video. Social media mentions in support of the redevelopment escalated sharply as more people heard about the construction, and we were able to engage with our community actively in this way.”

“We are very proud that both our live streaming service Streamdays 2 and RemoteManager have been used in such a seamless way to provide high quality live and recorded images to suit increasing interest in development of this high profile site. RemoteManager is now able to provide a robust repository of recorded images as visitors and the media continue to follow and update the story.”

RemoteManager is a unique, yet tailorable high resolution video monitoring service offering system design, installation, and wireless or wired connectivity and full hosting of live video and captured images 24/7/365 for the entire length of any construction, refurbishment or demolition project. Streamdays is a live streaming webcam hosting service designed to support organisations with public engagement projects. The service is widely used to promote tourist, leisure and hospitality locations right around the UK. For more details on NW Systems Streamdays go to: www.nwsystemsgroup.com/what-we-do/streamdays-division.php 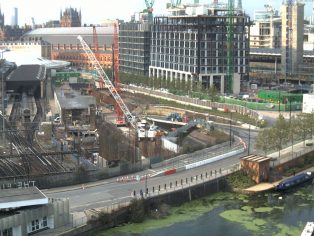