The American World Architecture News has released the list of buildings competing for the award for the most sustainable building of the year. The extension of Oslo Airport is one of the finalists.

The project is attracting a lot of attention from across the world and is the first airport terminal to attain BREEAM Excellent environmental certification, the second-highest certification possible. Oslo Airport has been nominated for a range of prizes. Among these, it is a finalist in the World Architecture Festival and Inside Awards, taking place this November in Berlin.

“This is a feather in our cap both for Avinor and for everyone at Nordic – Office of Architecture. We’re very proud of the entire airport in general and the fact that we have a building that the whole of Norway can be proud of”, says Joachim Westher Andersen, Head of Communications for Avinor Oslo Airport.

In particular, the optimal design of the new pier, its effective use of space, the use of snow cooling equipment, the choice of materials and the sheer number of public transport links to the airport have been highlighted. 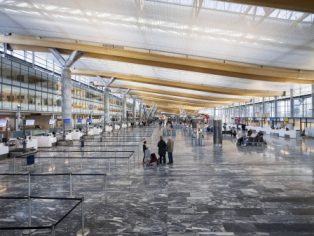