The transformation of Kanaal, the industrial site that serves as the headquarters for the Axel Vervoordt Company, is now complete. This represents a major milestone in the company’s history and the life of the founder, continuing a 45-year tradition of revitalising historic architecture to present an enduring philosophy of living with art.

The site’s grand opening features the inaugural exhibition by the Axel & May Vervoordt Foundation at Kanaal:

The Kanaal project is the realisation of the company’s vision to create a diverse artistic, cultural, residential, and commercial destination surrounded by nature. Originally built in 1857, the red brick warehouses and grain-storage silos of the former malting distillery have been transformed over the last decade into a 55,000-square meter complex. The site now includes 98 apartments, 30 offices and supporting facilities, an artisanal French bakery byPoilâne, an organic, fresh market by CRU, a restaurant, and multi-use auditorium, alongside the Vervoordt company’s offices, research, workshops and restoration facilities, showrooms, and exhibition spaces. Permanent installations by Anish Kapoor, Tatsuo Miyajima, Marina Abramović, and James Turrell are showcased.

The buildings that house the new spaces dedicated to the Axel & May Vervoordt Foundation and the Axel Vervoordt Gallery have been designed by Axel Vervoordt himself, in collaboration with the architect Tatsuro Miki, a partnership that has produced many projects based on Wabi principles.

The new exhibition spaces are installed side-by-side to respect the past, and a personal collection built over five decades, while also looking toward the future. The architecture harnesses the principles of sacred mathematical proportions, and is embedded with natural light throughout. The exhibition spaces are positioned to allow each artistic experience to breathe, offering visitors a unique journey through the latest evolution of the Vervoordt legacy. 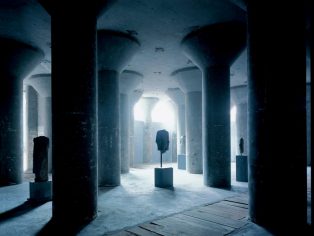