B3 Designers create Lyle’s in The Tea Building

Award-winning hospitality designers, B3 Designers, have collaborated with former Young Turks chef, James Lowe on his first restaurant, Lyle’s, which opened today. Located in the Tea Building in Shoreditch, East London, B3 Designers’ brief was to create a restaurant interior that reflected the era of the Tea Building, with a strong reference to British manufacturing and design from the mid-20th century.

The Tea Building is an imposing eight-storey building (initially built as a bacon factory for the Lipton brand) that still dominates the junction of Shoreditch High Street and Bethnal Green Road. Lyle’s restaurant, which takes its name from James’s mother’s maiden name, is located on the ground floor of the Tea Building. B3 Designers have taken inspiration from the years that Tea Building was established, with strong references to mid-20th century industrial design whilst always paying homage to British manufacturing and design. The overall style is uncomplicated, simple and relaxed. Natural light spills across the 120 sqm, 52 covers dining space due to three vast factory-paned windows to the front elevation of the building. An internal window in the same proportions connects existing Tea Building entrance with Lyle’s restaurant.

B3 Designers wanted to reference the existing fabric and architectural features of the Tea Building in their choice of materials. The venue has a poured natural concrete floor with simple, white crackle glazed tiles to the perimeter elevations and painted brick evoking an un-intimidating space where people feel comfortable, with the staff and guests providing the colour and warmth. This is enhanced by an open kitchen which is protected by an over 5 metre long pass counter that also doubles as a waiter station and storage unit. The joinery features honest details with a subtle contrast in woods with rich Iroko and warm, waxed Oak. Across the dining room there is only one style of seat setting – a two person table shrouded by reclaimed Ercol stick back chairs, a reference to long lasting quality of British design. The ceiling is gridded with large grey industrial lights reclaimed from an aerospace factory in Coventry suspended within the concrete coffers of the existing ceiling. “It’s not often that we get to design within one of London’s most historic and iconic commercial buildings, and right in the heart of East London so on B3 Designers’ home turf as well! James and John had great clarity from the start of the design process so it’s been a nostalgic and patriotic process referencing styles from the mid-century era whilst honouring and paying homage to celebrated British manufacturing and design. The non-fussy interior is the prefect centre stage for James Lowe to express his culinary skills.” says the team at B3 Designers.

Lyle’s is an all-day restaurant, starting with breakfast coffee (Belleville from Paris and Koppi from Sweden) and onsite-baked goods. The food is British, simple and driven by a common sense kind of mentality. The menu includes dishes such as Jersey Royals, Seaweed & Duck Egg; Aged Dover Sole, Monk’s Beard & Anchovy; Brown Butter Cake, Marmalade and Soured Cream. Daily lunch and dinner menus will be updated on www.lyleslondon.com. Lyle’s is open all day Monday to Friday and for dinner only on Saturday. 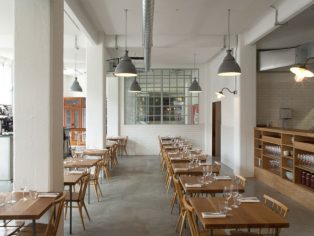