BakerHicks, the multi-disciplinary design and engineering company, has helped the John Smith’s Stadium kick off the football season with new stadium dugouts, lighting, and the media and advertising facilities required of a team in the English Premier League.

Kirklees Stadium Development Limited (KDSL) approached BakerHicks, with whom it has an ongoing working relationship, to provide civil and structural engineering support for the upgraded The John Smith’s Stadium. BakerHicks assessed how urgent upgrade works would impact the existing stadium structure and ensured they did not compromise either the buildings or the safety of fans, players and staff.

This included assessing whether the previous floodlight columns and the existing roof structures could accommodate bigger, heavier lights, as well as whether new LED ribbon advertising hoardings could also be safely installed. BakerHicks also advised on the development of new TV Studio and balcony camera seats, plus the installation of new ‘Recaro’ seats in redesigned and lowered dugouts for the managers and coaching staff.

“The new floodlights were a particular challenge, in assessing the floodlight towers we recognised that the weight and size of the new lights would attract significantly higher wind loads.

“Careful analysis and design enabled KDSL to utilise the existing columns, confident that they presented no risk to the larger crowds expected with Huddersfield Town’s Premier League promotion.” 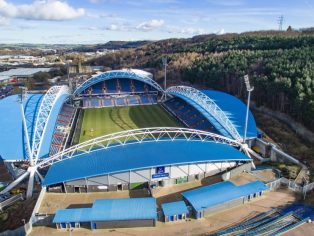