BAM Construction has won a £30million scheme to build an operating centre for Network Rail.

The contractor will construct a three-storey building in Basingstoke that will act as a signalling control centre for the Wessex region.

The 13,600 sq m facility will also include internal and external training facilities, as well as office space for rail staff. It forms part of Network Rail’s strategy to consolidate and future proof its operating centres across the UK.

The building will include state-of-the-art technology to allow the operator to monitor track in the region, as well as indoor and outdoor track and welding facilities for training operatives.

Failsafe mechanisms will be included to ensure the centre can operate in the event of a natural or man-made disaster, including electricity supply from two substations.

BAM is using building information modelling (BIM) throughout the project, allowing deeper collaboration with the design team and supply chain. This will allow the building to be constructed as efficiently as possible, and bring further benefits for Network Rail in the occupancy stage.

BAM is aiming for a BREEAM Very Good rating, with sustainability measures to include combined heat and power generation.

The contractor will look to recruit local suppliers where possible and aims to work with local schools to involve pupils in the project.

A 60m-long pedestrian bridge will be built over the railway line to improve access routes.

‘This is an important project as Network Rail looks to future-proof its critical rail operating centres across the UK.

‘BAM is delighted to have been trusted to deliver another major scheme for Network Rail and is determined to ensure its work benefits not only staff and passengers but the wider economy and community in Basingstoke.’

A groundbreaking ceremony was held in late September, and project completion is scheduled for November 2014.

BAM Construction is currently on site at the Engineers Triangle development in York, where it is building another Network Rail operating centre and training facility. 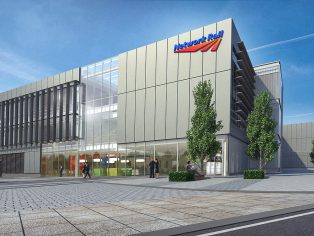 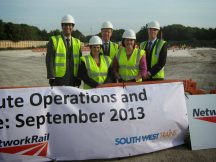