The Battle of Britain Memorial, located at Capel-le-Ferne in Kent, is a monument to aircrew that flew in the infamous Battle of Britain in 1940. A new addition to the memorial site is a 3.5 million pound state-of-the-art visitor centre called ‘The Wing’, which has been designed to replicate the shape of RJ Mitchell’s iconic spitfire wing with its distinctive uplift. Vital to the success of this new building was its flat roof, which is highly visible and plays an integral part in creating The Wing’s overall appearance.

The building consists of three main roof areas, with one central core roof separating the adjoining two wing shaped sections, totaling over 700m2 in all. Bauder’s anthracite coloured Thermofol single ply membrane was specified for the waterproofing because it is long lasting, visually appealing and allows for no physical penetrations of the roof. The system build-up also included Bauder’s 160mm PIR insulation for superior thermal performance, ensuring the roof achieved the required 0.16 U-Value.

A particularly challenging element of this roof installation was the amount of intricate detailing requirements, due to the elliptical shape and 5⁰ pitch of the wing areas. Welded roof profiles were also incorporated on the wings to give the appearance of a standing seam metal roof, demanding a high degree of skill and workmanship from Bauder approved contractor Byford Roofing to ensure that all the profiles lined up perfectly along the hips and valleys of the roof.

The national memorial site remained operational throughout the works causing logistical challenges for the project team, however all deliveries were timed as not to conflict with vehicles moving in and out of the facility. Despite the various challenges encountered, all works were completed on time and to budget providing the client with an innovative single ply roof of the highest quality backed up by a fully comprehensive 20 year guarantee.

“The roof is one of the main features of ‘The Wing’ and its construction presented us with numerous challenges, as some quite complex detailing was required. The Bauder single ply system has proved to be a very attractive, practical and cost effective solution and the support from the Bauder technical team has been excellent throughout.”

This landmark building offers an audio-visual experience in one half of the building and education facilities in the other, together with a café in the circular central area and a first floor balcony offering views across the English Channel. The Wing was officially opened to the public in March 2015 by the Queen who met with some of the last remaining members of the aircrew that defended Britain during the battle. 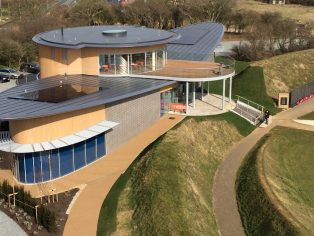