British Airways i360 is the world’s tallest moving observation tower and first vertical cable car. At the entrance of the attraction on Brighton Seafront is an accessible roof terrace area that features over 1,500m2 of Bauder’s reinforced, inverted hot melt waterproofing system with hard landscaping.

The futuristic British Airways i360 is a 531 foot tall structure located at the landward end of Brighton’s historic former West Pier. Eleven years in the making, British Airways i360 is the brainchild of architect-entrepreneurs David Marks and Julia Barfield of Marks Barfield Architects, best known as the practice that conceived and designed the world-famous London Eye. Groups of up to 200 visitors will glide gently upwards to a height of 138 metres in a futuristic, fully enclosed, hand-crafted glass viewing pod to admire 360-degree views across Regency Brighton and Hove, the South Downs, the English Channel and the south coast east to Beachy Head.

Passengers board each flight via the alluring outside terrace deck, which features reconstructed tollbooths of the original iconic West Pier that now serve as a ticket office and café, where people can relax and socialise. Understandably this roof top area will experience significant amounts of foot traffic all throughout the year, so the client wanted to install a waterproofing system that was both robust and of the highest quality. Given these requirements, Bauder’s hot melt structural waterproofing system with hard landscaping was a natural choice. The system is designed to last the lifespan of the building and provides a monolithic, fully bonded membrane that is self-healing to minor punctures and ideal for use on protected roof areas. As part of the system approved contractor Accurate Roofing also installed inverted insulation, to deliver high thermal performance in exposed conditions and help retain heat within the beachfront building below that houses a brasserie, café and gift shop.

This new landmark is an exceptional example of how modern architecture and roof landscaping can revive a historical monument, which is expertly and intricately intertwined with over 150 years of history. British Airways i360 has already attracted significant interest and proven extremely popular, welcoming its 100,000th visitor just three weeks after it was opened to the general public in August 2016. The attraction was given a Royal opening by His Royal Highness the Duke of Edinburgh in October. 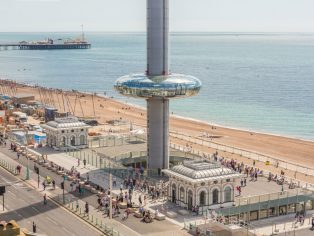