BDP and Wolfgang Buttress have won the AJ100 Architectural Collaboration of the Year Award. The award was announced on 8 June at the magazine’s annual dinner and awards presentation event at the Tower of London.

The winning team was chosen from a shortlist of 8 after the judges said, “BDP went above and beyond the call of duty to ensure that Wolfgang Buttress could realise his vision.”

Wolfgang Buttress was the creative lead for the UK Pavilion at the Milan Expo, and its realisation has been a team effort spanning many disciplines.  The Pavilion was completed to a very demanding timescale, delivered on budget and has met with broad critical acclaim, many awards and plaudits in the press. BDP was an integral part of the team that made this happen.

It was also announced on the night that BDP has held on to its number two position in the AJ100 annual league table of Britain’s biggest architecture firms for the fifth consecutive year, with 37 more architects than the next biggest practice. 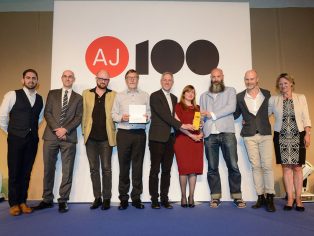