Benoy, the award-winning firm of Architects, Masterplanners, Interior and Graphic Designers, has celebrated the opening of its first completed development in Tianjin, Riverside 66. Alongside developer Hang Lung Properties Limited, Benoy attended the opening of the new iconic commercial development in China’s fourth largest city this September.

Benoy worked as the Interior Architect and Graphic and Signage Designer on the retail scheme alongside Kohn Pederson Fox Associates as the Architect. Strategically located, Riverside 66 is in the heart of Tianjin’s Haihe Central Business District, at the intersection of Binjiang Road and Heping Road, one of the most famous commercial streets in China.

Celebrating its proximity to the Haihe which winds through the city centre, Riverside 66 engages with the waterfront through its striking 380m long glass façade. The 152,800m2 retail mall is now one of the longest single structures in the region, creating a new landmark and experience for the city.

“The location of Riverside 66 is a real asset for the development and one which we have capitalised on in our design. Situated alongside the He Ping Lu pedestrian boulevard, the development has extended Tianjin’s busy streets into the retail mall.”

Specifically designed to engage with the bustling external surroundings, the façade provides a two-way view between the vibrant retail interiors and the streetscape and activities taking place outside. On the top floor, Benoy created the ‘Skystreet’, an entire level of dining and restaurants which sits beneath the transparent canopy roof, overlooking the central district.

“By placing the F&B area on the top floor, we invite the steady stream of visitors to make a journey through the development and weave their way around the open atriums and levels to the summit of the building. The journey through the seven storeys presents a diverse shopping and lifestyle experience which keeps a visual connection to the riverside setting in Tianjin.”

Benoy worked to specifically anchor the merchandise within the grand open spaces through stylised feature boxes, elegant finishes and uninterrupted sightlines to enhance retail expression. The signage design and bespoke interior furnishings have also been blended into the development, influenced in their form by the iconic architecture of Riverside 66.

Proving its commercial attraction, Riverside 66 opened with 300 tenants including Aape, Anne Karen, Armani Jeans, COS, F. Façonnable, Hartmann, Hugo Boss, Michael Kors, Versus and will welcome Apple in the near future.

For its environmentally conscious design, Riverside 66 has also obtained a LEED Gold precertification from the US Green Building Council. The development has also been widely recognised for its innovative design with awards including the ‘MIPIM Architectural Review Future Project Award 2007’ and a ‘2010 AIA New York Chapter’s Design Award’. 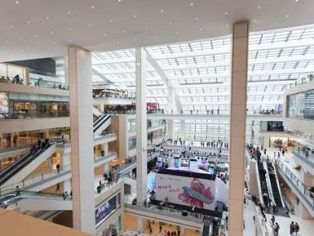