Benoy has confirmed its appointment to the future redevelopment of London’s Heathrow Airport this week. The British design firm will join the team delivering the Commercial Masterplan for Heathrow’s ambitious expansion plans which will see it transformed into a next-generation, world-class airport.

Supporting the Lead Architect, Grimshaw Architects, Benoy’s commercial masterplanning scope will be site-wide and consider enhancement opportunities across each of the terminal areas.

Earlier in the year, Benoy was one of four British firms shortlisted by Heathrow, alongside Grimshaw, Zaha Hadid and HOK, to deliver bold new ideas and conceptual designs to push the boundary of what Heathrow could be as the country’s global aviation gateway.

Speaking on behalf of Benoy, CEO Tom Cartledge commented, “We are honoured to be joining such a passionate and outstanding team to help bring to life this ground-breaking vision for Heathrow.”

“From the start of the selection process, we have shared and believed in the same outlook as our client; to blend a powerful people-centred approach within a convincing commercial and urban matrix.  We are committed to seeing Heathrow continue to become a fully integrated and sustainable airport which will drive innovation and showcase the best of British design and can’t wait to get started,” said Tom.

“We are very pleased to welcome Benoy with their commercial masterplanning expertise to our design team and know they will add value and experience to our ambitious design and engineering schedule. We will use their tremendous talent to build an expanded airport Britain can be proud of, playing a key part in a prosperous and outward looking trade nation.”

Benoy has been strengthening its presence in the Aviation sector since its work on the Hong Kong International Airport enhancement in 2010. The firm is currently delivering two of Singapore Changi Airport’s most high-profile future developments, Terminal 4 (T4) and new international attraction Jewel Changi Airport. Benoy is the Concept Design Architect and Interior Designer for T4 which will open at the end of 2017 and the Retail Interior Designer and Aviation Facilities Planner for Jewel.

This year will also see Benoy celebrate its heritage as a British designer with its 70th anniversary. 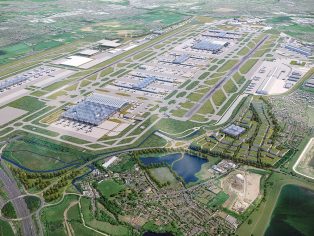