Bond Bryan are delighted to be shortlisted for two awards at this year’s Education Estates Awards. These awards focus attention on some of the most important issues within the Education sector and recognise the very best companies, collaborations and projects – sharing best practice and inspiring others to adopt new and better ways of working that deliver outstanding results.

Bond Bryan have been shortlisted within two categories: Architectural Practice of the Year and Project of the Year with two projects in the running: National College for High Speed Rail, Doncaster Campus and the Advanced Manufacturing Building, The University of Nottingham.

Architectural Practice of the Year
With four UK studios in Sheffield, Birmingham, London and Kent, Bond Bryan have a nationally-significant presence and have worked with educational providers across the country. They embody many of the different facets that educational architecture features: from Strategic Property Advice to Digital Architecture, as well as many forms of architectural design and consultancy. 2018 has seen Bond Bryan deliver some of their finest and most critically-acclaimed work to-date.

Recent projects and achievements include:

Bond Bryan’s design takes its inspiration from Doncaster’s historical railway heritage, with linearity and visibility being the two key themes. The building balances learner-led academic classrooms with realistic working and fit-out areas and workshops that feature large-scale working components for the current high-speed rail industry and a high-speed locomotive for diagnostic training.

With a raft of sustainable features and a BREEAM Excellent rating, this project won both the RIBA Yorkshire Sustainability Award and the overall RIBA Yorkshire Regional Award. Alongside these highly-esteemed awards, this project has also received the Project of the Year and Best of the Best at the Constructing Excellence Award in the region and is now shortlisted for the national award.

Project of the Year – Advanced Manufacturing Building, The University of Nottingham
This iconic gateway building brings together a diverse range of innovative research groups as well as leading industry experts into one facility at the entrance to the University’s city centre Jubilee Campus. Having won the commission for this project – via a design competition in late 2014 – Bond Bryan were able to deliver the University’s requirements with an efficient maximisation of site space within a single phase.

Now fully operational, this building has received critical commendation across the country – winning the RIBA East Midlands Award for the region and showcasing the positive impact that a collaborative effort, between client and design team, can have on a building.

The annual Education Estates Awards & Dinner will take place at the Mercure Manchester Piccadilly Hotel, on the 16th October. 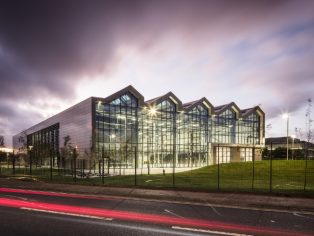