As a supporter of the Mies van der Rohe Foundation in Barcelona, Roca is delighted to be hosting a lecture and dialogue, in association with the institution, entitled Breaking New Ground.

Held at the Roca London Gallery on the evening of Thursday 13 February, the event will present a panel discussion for architecture enthusiasts. Speakers will include Shih-Fu Peng of Heneghan Peng Architects, who was shortlisted for the prestigious European Union Prize for Contemporary Architecture – Mies van der Rohe Award in 2013 for the Giant’s Causeway Visitors’ Centre. Other speakers of note on the evening will include Ivan Blasi, Co-ordinator of the Prize, and two representatives from the Architecture Foundation, including the Acting Director and Curator of Events.

Together they will discuss the role of local and national architectural institutions and other architectural promoters, as well as highlighting the Emerging Architect Special Mention Award. Granted every two years to acknowledge and reward architectural production in Europe, the jury of the Mies van der Rohe Awards selects two works: one that receives the European Union Prize for Contemporary Architecture in recognition of its conceptual, technical and constructional qualities, and the other that receives the Emerging Architect Special Mention.

The event on 13 February marks a welcome return to Roca London Gallery for the Mies van der Rohe Award, with the finalists and winning mini-models showcased in an exhibition at the Chelsea venue back in 2011.

Breaking New Ground will take place at Roca London Gallery on Thursday, 13 February, from 6.30pm to 8.30pm, with time for questions and networking included. To RSVP to the event please visit http://bit.ly/LrxWCC 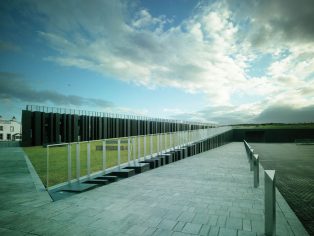 Shih-Fu Peng, of Heneghan Peng Architects who were shortlisted for the European Union Prize for Contemporary Architecture Award, will speak at the event.