Cheltenham Architects car park is part of a complex that includes an adjoining three-storey Victorian building and garden. The site architect felt that there was a need to have a drainage system in place to address all of the complex water management issues arising from the site layout.

The complex is designed in such a way that requires a specific functional infiltration method to cope with excessive water levels, while preventing detrimental effects from flooding – something which the site has previously experienced.

Brett Landscaping was approached by the site manager after initial investigations determined that the Brett expertise in permeable paving would provide the most suitable and cost effective SUDS procedure.

In order to obtain the best paving solution for the site’s water drainage needs, Brett Landscaping used its PermCalc design software, focusing on specific techniques and detailing to achieve the optimum mix of functionality and aesthetics.

A number of design features protect the site buildings, including: a slight incline away from the perimeter to encourage water to travel towards the centre of the paved area; an impermeable liner next to the wall foundations to cope with larger volumes of water; and an overflow pipe to deal with particularly heavy flooding.

Alpha Flow block permeable paving was chosen as the most suitable paviour for the Cheltenham site.

“Alpha Flow blocks can be laid in a pattern that utilises large and small blocks to form a herringbone patter. This enhances the resistance to turning wheels and channelling from vehicles manoeuvring in the restricted area, giving the appearance of randomly laid cobbles.” explains Andrew Gill, Marketing Manager at Brett Landscaping.

The rustic-edge character of the charcoal coloured paving also fitted well with the Victorian buildings and created a period courtyard feel to the project. Alpha Flow, laid in this pattern, but using thicker blocks and appropriate pavement structure is also most suitable for heavy trafficked roads.

With 2012 proving to be one of the wettest years on record, the completed permeable pavement has already proved its worth against both short intense rainfall events and persistently heavy rain over time.

“Even under adverse conditions, there has been no surface run-off, in contrast to the surrounding nearby areas that have suffered severe flooding,” confirms Andrew Gill.

“The site manager also reports that regular inspections of the pavement base have failed to reveal any water stored within the pavement even following heavy rainfall.” 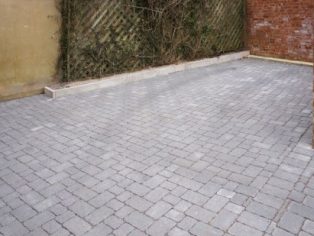