Isambard Kingdom Brunel’s legacy in London continues as his first ever project opens as the capital’s latest cultural attraction.

Ever the showman, Brunel organised underground fairs and banquets inside the Thames Tunnel – once described as the Eighth Wonder of the World – in the mid-nineteenth century. He would approve of the transformation of his Grade II* listed shaft into the Grand Entrance Hall; a performance space, 190 years after construction began.

The Grand Entrance Hall (or ‘sinking’) shaft is now accessible to the public as a new freestanding, cantilevered staircase has been completed, designed by architects Tate Harmer. The project is part of the Brunel Museum’s plans to widen public awareness of the built legacy of Isambard Kingdom Brunel and our industrial heritage. The architects have also created a new doorway into the shaft.

The project has been made possible thanks to the generosity of the Museum’s grantors AIM/Biffa Award (Association of Independent Museums) and the National Heritage Landmarks Partnership, as well as generous donations from London Borough of Southwark and great operational support from Transport for London.

The former entrance shaft to the historic Thames Tunnel will become a newly accessible underground space and a key exhibit for the museum, hosting events and performances and breathing new life into this important fragment of Brunel’s first project. Brunel’s father Marc began the tunnel with his teenage son, Isambard, who later became resident engineer. It is the only project that father and son worked on together, and Isambard’s first. The Thames Tunnel opened in 1843 and is the first underwater tunnel in the world – and the birthplace of the modern metro system.

The shaft is approximately 50ft in diameter and 50ft deep – with smoke-blackened brick walls from steam trains, providing a raw but atmospheric backdrop. Tate Harmer’s ingenious ‘ship-in-a-bottle’ design means that the staircase, constructed by Cobalt Green Construction, is completely independent of the important historic fabric of the structure. Visitors will use this new access point as a means to descend into a rarely glimpsed portion of our industrial heritage, and intriguing underground space.

Jerry Tate, Partner of Tate Harmer said: “It was vital that the staircase and new entrance to the Rotherhithe shaft did not impact on its historical significance. We wanted to celebrate the raw nature of the Victorian industrial heritage while providing the public proper access for tours and performances”.

Robert Hulse, Director of the Brunel Museum said: “Brunel was a daring engineer and organised the world’s first underwater concert right here in Rotherhithe. Museums should be places to be inspired and places for celebration and performance. Happy Birthday Brunel! 210 years old this week”.

Mike Stubbs, TfL’s Director or London Overground, said: “It is testament to Brunel’s vision that the first ever tunnel built under water is now a key part of the London Overground network. We’re very supportive of the great work the Brunel museum do to promote his legacy and believe that the new theatre space will be an exciting addition for visitors.”

The Brunel Museum is on the south bank of the River Thames in Rotherhithe, immediately west of Brunel’s Rotherhithe sinking shaft in the tunnel’s Engine House, which is a scheduled ancient monument. The museum exhibits and educates the public about the construction and working of both Marc and Isambard Kingdom Brunel.

The Thames Tunnel once provided a pedestrian crossing of the River Thames nearly two miles downstream of London Bridge. The shaft has now been sealed with a concrete floor, following the transformation of the tunnel for the construction of the East London Line and London Overground. 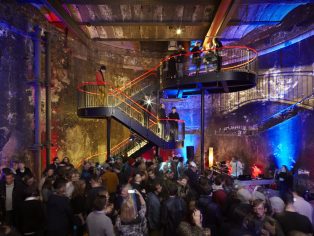