A gloomy connection between two terminals at Brussels Airport in Belgium has been transformed, thanks to a new state-of-the-art building that features a Hunter Douglas customised ceiling.

The Connector is a €71 million above-ground structure that connects Pier A and Pier B terminals – the latter of which was built in the 1990s and the former in the 2000s.

Both have different architectural features and the aim of the new linking building was to bring the two areas together. One of the most striking elements of the new structure is the complex, customised 300C shell-like roof structure, which was manufactured by Hunter Douglas.

The perforated ceiling panels contain an acoustic membrane, which gives them a high degree of sound absorption, and they are also detachable, allowing easy access to services and for maintenance.

The bespoke 300C ceiling was designed to meet the demanding aesthetic and acoustic requirements of the airport. The ceiling areas are 15 metres wide, 50 metres long, and are also curved, which makes them fully integrated with the roof. 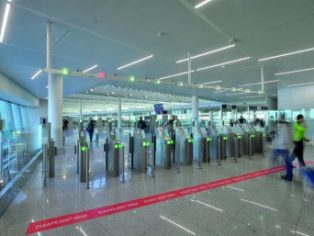