BuckleyGrayYeoman has won planning consent for the refurbishment of the former Wickhams Department Store on the Mile End Road in London’s East End, on behalf of Resolution Property and Schroders REIM. The Tower Hamlets planning committee’s decision gives the go-ahead to refurbish and extend the 1927 Beaux Arts building to create Department W: a modern, workspace-led, mixed use development of nearly 120,000 sq ft BuckleyGrayYeoman’s refurbishment will add to the £1.5 million investment that has already been spent on the comprehensive refurbishment of the basement, ground and 1st floors of Department W to create a new community of tech businesses. There are currently over 500 entrepreneurs and 150 start-up businesses working in the building, including Central Working, Microsoft Ventures, Barclays Techstars and The Tech City Investment Organisation.

The plans will retain and conserve the Wickhams building’s famous ‘missing tooth’: the Spiegelhalter’s facade, which became the focus of a local conservation campaign when plans to refurbish the building were announced in early 2015. The Spiegelhalter’s facade will form the main entrance to Department W, with the void where the shop once stood forming a courtyard that will feature artwork to commemorate the unique story of the site.

“Department W will create a high quality, flexible and social workspace of the type perfectly suited to young entrepreneurial companies, bringing the economic benefits of these energetic and innovative businesses to the Mile End Road.

“We’re looking forward to continuing our involvement with the building, delivering a scheme that will revitalise and substantially repair the building, restoring and preserving this local landmark to create a new hub for local businesses.”

“Whitechapel is emerging as London’s next creative and digital quarter, founded on an already rich and diverse business community. This week’s planning consent clears for the way for further enhancements to the Dept.W creative community, to help the area compete for incoming high-growth businesses, bringing jobs and economic benefits.”

BuckleyGrayYeoman was appointed in late 2013 to design the refurbishment of the building, working with development managers Resolution Property to use the size and landmark status of the building to create a new tech hub with the necessary critical mass to lure businesses away from the existing tech cluster in Old Street.

Department W began life as the Wickham’s Department Store, which on its opening in 1927 was proclaimed by its owner as “the Harrods of the East”. The department store occupied the building until 1965, when it closed and the building was divided up between several different occupiers. The building has since been returned to single ownership and despite years of neglect, the quality of the grand Beaux Arts façade means that the refurbished building will have an unrivalled presence in the local townscape.

BuckleyGrayYeoman’s refurbishment will extensively repair the facades, removing the accretions of pipework and other services that have been added piecemeal over the years. The designs extend the building upwards, adding a fourth storey on top of a third floor that will be extensively remodelled to rationalise floor levels and create a continuous office floor. The third and fourth floors will be stepped back from the existing storeys to reduce their visibility from the street and to avoid overlooking of the back gardens of the houses on Bellvue Place to the north.

Department W is located on the East-West cycle superhighway. The building is four minutes’ walk from either Whitechapel or Stepney Green underground stations and will benefit from the opening of Crossrail at Whitechapel in 2018.

Work on the refurbishment will begin in winter 2016 and is expected to complete in 2018. 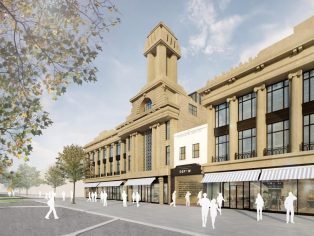