Design Council reports that physical inactivity is costing the NHS £900m per year. In advance of a major summit during London Design Festival, Design Council demonstrates how a big part of the answer lies in the design and adaptation of our towns and cities to encourage daily physical activity.

As the pandemic of inactivity continues to worsen across the UK, bringing with it one of the greatest public health crises of modern times, the Design Council has launched its latest campaign, Active by Design, showing how decision-makers, architects and designers can shape neighbourhoods and buildings to encourage physically active lifestyles.

The campaign, launched in April this year, has its first major Summit on Thursday 18 September where leading experts in the fields of architecture, design and public health will come together to discuss this concerning issue. A guide has been released by the Design Council highlighting the findings of research into levels of inactivity, now seen as the norm in the UK.

Startling statistics cited in the guide include the fact just 21% of children now play outside, compared with the figure 71% for their parents’ generation. A quarter of Britons are now walking less than nine minutes a day and the cost of physical inactivity to the NHS has risen to over £900m a year. The guide highlights examples of how this trend could be curbed by designing and adapting our urban environments to encourage daily physical activity.

Active by Design has been created in response to the UK’s worsening health crisis and suggests that local authorities and developers step up to the challenge by creating places that make physical activities such as outdoor play, walking, running and cycling more accessible, attractive and safe.

Drawing on successful examples from around the world where design has been used to encourage greater levels of physical activity and increase access to healthy and nutritious food, Design Council has collated this compelling research to examine how the declining health of the nation can be halted through changes to the buildings, streets and open spaces that we use.

Another shocking statistic highlighted states 68% of men and 58% of women are now overweight or obese in England alone, due partly to low levels of day-to-day activity. The campaign suggests replicating successful socially driven projects such as the High Line in New York, the bicycle sharing schemes of Barcelona, Buenos Aires and Hangzhou, and the traffic-free streets of Los Angeles as possible solutions for the UK. Active by Design aims to take examples such as this and expand on them to entrench physical activity within regeneration schemes and housing projects being planned across the country.

“The Active by Design campaign aims to end the unequal distribution of healthy environments so that everyone can lead an active life, wherever they live. We have been working with developers, local authorities, communities and designers to transform neighbourhoods into places where being active is a normal and enjoyable aspect of daily life. With our help, our partners can enable activity like walking, cycling, gardening, sport and play through excellent design in the built environment.”

The campaign will highlight the need for a shift in the way we think about town planning if such initiatives are to become commonplace.

“The campaign draws together a raft of evidence to lobby Government to ensure the UK’s housing need is met through the creation of places that people want to both live in and be active in.”

Active by Design has come at a crucial time to help improve public access to opportunities for daily physical activity. The Government recognises the severity of the issue, towns and cities across the country are now charged with tackling the problem through their new Public Health responsibilities. The construction industry is building new housing at a 112% increase over the decreased levels of 2009, so embedding physical activity opportunities in new schemes is now more important than ever.

“If we are to make any real change to the health of the nation we need to use intelligent design to open people’s minds.

Intelligent design solutions really do have the power to transform lives and now, more than ever, the need to harness that power is paramount.

Bringing architecture, design and public health together as part of the London Design Festival is a fantastic initiative and the perfect platform to widen the debate. If Active by Design can encourage more of us to stop and think about better ways to do things we will be one step closer to a fitter and healthier nation.”

The Active by Design Summit will take place on 18th September, bringing together some of the world’s leading experts in the fields of architecture, design and public health, including Professor Harry Rutter of Halsa Consulting, Riccardo Marini, Director at the world famous Gehl architects in Copenhagen, and Mandy Ayres, Senior Director of Sport for Nike. 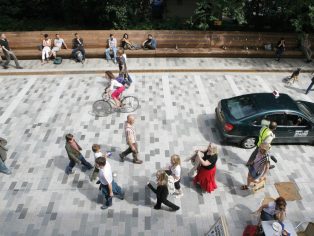