Participants delivering events as part of the Clerkenwell Design Quarter will host exhibitions and one off events to highlight new collections in furniture, lighting, jewellery, textiles and products. As part of the programme and debuting this year will be the UK’s first dedicated architectural and design film festival – AND Film Festival.

Curated in partnership with film advertising specialists AllCity Media and kindly sponsored by print media giants Callprint, the AND Film Festival will screen engaging, inspiring and awesome films for FREE to visitors of the London Design Festival 2014.

Sculptural forms that are classically inspired, but with a modern twist are the motif of After Adam, the new 40-piece collection for Fratelli Boffi by British architects Archer Humphryes. Intriguingly reinterpreting the work of eighteenth-century Scottish designer Robert Adam, the entire concept is developed around modules of elegant simplicity and is inspired by Georgian decoration. www.afteradam.com.

AllCity Media, AND Film Festival co-curators will be screening a new documentary film Sign Painters, which focuses on the dying art of sign writing. AllCity’s office is the main CDQ hub throughout the festival. Visitors can drop in and see AllCity’s fantastic array of film poster designs and gather information on events within the programme. www.allcitymedia.com.

Join Alias at the Poltrona Frau Group Showroom and experience the new wood products Kayak by Patrick Norguet and Tabu by Eugeni Quitllet, designs which are enabling them to stay at the forefront of Innovation, Technological lightness and Versatility. www.aliasdesign.it.

Objects can mean different things to different people, provoking emotions that make an object interesting to one but not necessarily to another. The Wall of Objectification installation aims to explore various meanings of treasured objects in a disposable world. To accompany the installation, atwork have commissioned a new animated film by illustrator Eve Archer, which narrates a story inspired by objects. www.atworkassociates.co.uk.

“Cuba will count as having the most beautiful academy of arts in the world.”

As part of the AND Film Festival Bene London is pleased to be hosting a rare UK screening of the documentary feature Unfinished Spaces. The film charts the history of Fidel Castro’s radical 1961 National Art Schools project, in Havana, Cuba. The film will be screened in Bene’s collaboration space, on the Nice Wall. www.bene.com.

Cappellini at the Poltrona Frau Group Showroom celebrates the work of Jasper Morrison, one of today’s most influential designers. On show will be a collection of pieces, including the new Orla sofa and the re-interpretation of his classically designed chair, the Lotus Deluxe. www.cappellini.it

Designersblock showcases multidisciplinary design from over 100 independent designers, collectives and companies. Since Designersblock launched its first exhibitions in 1998 they’ve worked with forward thinking property owners to source amazing locations for their exhibitions. This year Designersblock is taking place within Clerkenwell’s most iconic landmark – The Old Sessions House, Clerkenwell Green. www.designersblock.org.uk.

Thirty-three contemporary jewellers from all over the world explore the colour Green. Green: it’s just a colour, yet it can also stand for so much more. It’s the colour of money, of envy and of energy; it can stand for ethical products, the environment, symbolise fertility and nature. This exhibition will be a juxtaposition of jewellers, themes and styles, all suspended from the gallery’s ceiling, which will invite the viewer to engage and interact with the work. www.lesleycrazegallery.co.uk.

Housed in the Golden Lane site, home to the MA Fashion Footwear course, the Maker Library will include a small exhibition of footwear from the LCF archive. There will be Workshops held in the Maker Library each day for the duration of the London Design Festival, plus an event on Tuesday 16th September as part of the Clerkenwell Design Quarter late night event series.

The Mosa flagship store in London will be hosting a series of lively workshops and talks based on their Cradle-to-Cradle principles, as well as screening films about Dutch design, and hosting the UK premiere of Space Electronic, which launched to great acclaim this year at the Venice Biennale. www.mosa.nl.

Poltrona Frau this year invites you to a masterclass in leathership. Come to the Poltrona Frau showroom and experience the material on which Poltrona Frau have built their success. You will also have the opportunity to see some new products launched at the Salone del Mobile 2014, including the Nivola by Roberto Lazzeroni. www.poltronafrau.com.

On the occasion of the new AND Film Festival, Publica will be screening international short films from their office window overlooking Clerkenwell Green. Films include: Streets – New York City, The City of Samba and Walkabout*4 – the Biscuit Factory, Glasgow. These dynamic shorts are curated around the themes of city spaces and city stories, and encourage us to ask questions about how architecture and urban design affects the way we live. Get a drink, take a seat outside on the green and join the Publica team. www.publica.co.uk.

Simone Brewster invites you to visit the launch of her new collection, Tropical Noire. This series of objects draws inspiration from totemic sculptures and applies the rhythmic and culturally esoteric expression to the vase typology. Simone Brewster is a London based designer, she holds a degree in architecture from the Bartlett UCL and an MA in Design Products from the Royal College of Art. To support this new work the Crafts Council Pop-Up Shop will be transformed into an exotic tropical inspired installation. www.simonebrewster.co.uk.

Shine 2014 is an exhibition showcasing designer talent in Goldsmithing, Silversmithing & Jewellery, from the impressive hand skills of Goldsmiths’ Centre trainees through to emerging designer makers. Experience the innovative, the traditional and the challenging at this leading destination for craftsmanship in the UK.

A kaleidoscopic film by Laura Falconer showcasing the work of jewellery designer Silvia Weidenbach. Combining new technologies with traditional artisan skills, Weidenbach explores and experiments with ideas of beauty, preciousness and ugliness. Her art-cum-jewellery pieces are 3-D printed and created using a haptic arm, a tool that enables her to draw the shapes as though sculpting in clay, an exercise she describes as ‘a digital craft’. The Goldsmiths’ Centre will also be showing clips from Masters of Dreams and Smith-Grey on a loop throughout the Festival.

“Master of Dreams is a fascinating documentary series that gives a unique insight into the world’s most legendary jewelry brands produced by French Connection Films. Gemologist Ken McGrath, creator of the “Masters of Dreams” series, will present one of the four episodes: “The British & South African Jewellers,” which will be followed by a Q&A with McGrath and luxury British jewellery designer Stephen Webster. www.goldsmiths-centre.org.

This exciting exhibition explores just what is possible from the seemingly impossible. Taking remarkable materials that can shatter our realities and radically enhance our perceptions of material science. The materials amassed show quite how extraordinary we are as original thinkers. Innovative materials created and the unique processes used demonstrate another quantum leap in the direction of these new design possibilities. www.scin.co.uk. 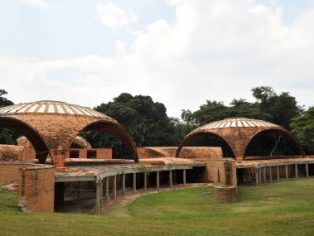 An exhibition at TOTO