The teams’ urban design visions for an Entrance Precinct Masterplan and concept designs for a new circa €48m Centre for Creative Design are now available to view on the competition website at: competitions.malcolmreading.com/universitycollegedublin/shortlist

The brief to competitors was to draw up an urban design vision that foregrounds a highly-visible and welcoming entrance precinct, and create a concept design for a charismatic yet integrated new 8,000 sqm building – the Centre for Creative Design ­– that expresses the University’s creativity. The Future Campus project is intended to create a stronger physical presence and identity for the University within Dublin, and raise the profile of UCD nationally and internationally.

“This is an exciting, energising moment for University College Dublin. We now have six possible futures for our campus centre-stage, and all from acclaimed international teams, who are creating the most interesting and iconic architecture today.”

“We are seeking comments on the design proposals from the UCD community and their feedback will be of interest to the jury, who face the absorbing task of analysing the schemes and interviewing the teams.”

“This is such an important project: the jury’s choice will shape the identity of the University over the coming decades and allow UCD to realise the potential of its exceptional campus.”

“The brief for UCD’s Future Campus design competition asked a great deal of the shortlisted teams. The competition focuses on enhancing and enlivening our extensive green campus and on embodying UCD’s ethos of innovation and creativity in the new Centre for Creative Design.”

“We are seeking an integrated design proposal that improves the experience of our campus for its users and that better connects us to our surroundings, orientating us outwards to the world and inviting our communities to engage with us.”

“In commissioning an international competition, UCD has demonstrated its commitment to design excellence and confirmed its receptiveness to talent, ingenuity and imagination – as shown in the designs revealed today.”

“As universities increasingly compete across national boundaries to attract gifted students and researchers, the range of facilities and the quality of experience they provide become ever-more important. Through this competition, UCD has expressed an ambitious vision for the future and moved closer to achieving it.”

The six teams were selected in April by a panel chaired by the competition jury chair Professor Andrew J. Deeks, President of University College Dublin. The shortlist was expanded from the expected five to six in recognition of the outstanding response from the international design community.

The first stage of the competition, which sought expressions of interest detailing each competitor’s proposed team and experience, attracted 98 teams from 28 countries.

Each finalist team will receive an honorarium of €40,000 for their competition work and international teams were required to team up with a local executive team for the second stage.

Known as Ireland’s Global University, University College Dublin is the country’s largest and most internationally-engaged higher education body, the destination of choice for international students coming to Ireland. It is also the most popular choice for Irish students seeking a university place in their home country.

Founded as an independent university 160 years ago by the visionary John Henry Newman, UCD has been a vital and influential force in shaping modern Ireland, both politically and culturally. UCD’s ability to foster creativity and expressiveness is reflected by alumni including the 20th century’s outstanding author, James Joyce; film maker Gabriel Byrne; and comedian Dara Ó Briain; as well as many successful architects and designers.

The competition jury will assess the final submissions and interview the teams in July, with the winner announcement anticipated for August.

The competition is being run in accordance with EU procurement rules and the Republic of Ireland’s S.I. No. 284/2016 European Union (Award of Public Authority Contracts) Regulations 2016. This competition has been advertised in the Official Journal of the European Union (OJEU). 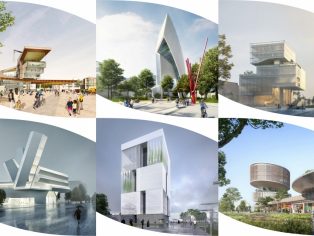