A contractor specialiSing in underfloor heating systems has made extensive use of Marmox SoundBoards on a challenging project to join two Thameside apartments to create an 11-room property: overcoming significant difficulties in terms of differences in floor level, as well as providing a waterproof and acoustically attenuated subfloor.

Gaia climate solutions carried out the work at the Riverside Court building in the booming Nine Elms area of south London on behalf of Lifestyle Design & Build, the main contractor. Despite having a modern, framed construction fitted out to a very high standard, there was a significant difference in height between the proposed floor finishes one of timber one of stone and wanting to employ as few wet trades as possible within the occupied building, Gaia opted to utiliSe two different thicknesses of Marmox SoundBoard across the existing surfaces in order to create a “level playing field” – over which the DEVI electric heating system could be laid. 54 square metres of the 8.0 mm thick SoundBoard were laid where 20mm stone tiling was to be used, while a further 140 square metres of the 12mm Soundboard where the 14mm timber was to be used completed the exercise.

With the new underfloor heating system installed across the revised room layouts and successfully commissioned, Gaia completed its contract by installing a mix of 20mm ceramic tiling and 14mm high quality timber flooring. Both of these finished surfaces used are, of course, associated with noise nuisance due to their hard nature; often magnifying the sound of footsteps. Thanks to the make-up of the Marmox SoundBoard, however, the occupants of the properties beneath or in adjoining rooms will be effectively insulated from any direct sound transmission.

This is because SoundBoard is not simply a tile backer, but incorporates a fully bonded sound attenuation layer, which acts to drastically reduce the vibrations which we then hear as noise. SoundBoard is supplied in sheet sizes of 600 mm x 1250 mm, and in thicknesses of 8.0 or 12mm, weighing 1.8 and 1.95 kg respectively. They offer a Lw sound reduction of 20db and can be specified as part of Robust Detail, Appendix D solution to impact sound transmission.

They are readily cut or shaped with a knife to fit any room layout. In addition to their acoustic performance, SoundBoards provide thermal transmittance figures of 0.35 or 0.39 W/mK for the two different options. As is the experience of flooring specialists and general builders across the country, Gaia Climate Solutions found that SoundBoard facilitated the installation of its underfloor heating system in potentially difficult circumstances. 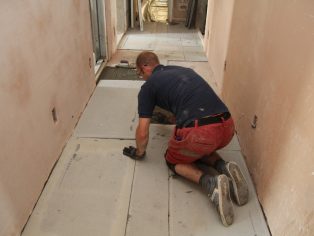