Concept to turn London Underground into a moving walkway

London-based architecture practice NBBJ, the team behind the shadowless skyscraper concept, has revealed a radical rethinking of the London Underground’s Circle Line that promises to spur new ideas for urban mobility.

The Circle Line carries 114 million people each year along its 17 miles of track. Currently able to accommodate eight trains at any one time and reach a top speed of 20 miles per hour, the line is one of the most congested in London, often subject to delays and frequently unpleasant for overheated commuters.

Each travelator increases in speed from its adjacent walkway. Commuters would enter at the slowest speed of 3mph and slowly increase their pace by stepping onto adjacent walkways, up to a top speed of 15mph. When added to an average walking pace of 3mph, pedestrians would actually move faster on foot than today’s Circle Line trains, which must stop for boarding at each station. The result would be considerably quicker, more enjoyable and healthier journeys.

Diagram showing the varying speeds of each travelator in between stations.

This year the Circle Line celebrates its 110th anniversary since becoming electrified. If implemented, this proposal would mark its most significant change ever.

NBBJ was inspired to develop this concept to open new possibilities for putting the fun back into travelling on the Underground, for tourists and Londoners alike. While the Circle Line travelator would likely become one of London’s most efficient and unusual modes of transport, one thing is certain: London requires creative thinking to build a healthy, happy and more liveable city for all. 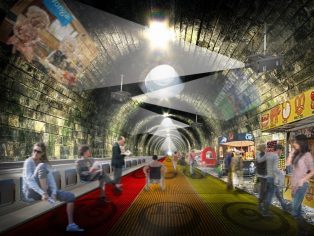