Merseylink’s construction teams have begun to build the three giant pylons that will support the Mersey Gateway Bridge.

A major concrete pour is set to take place on Monday 3 August 2015 for the south pylon foundation, which will involve pumping 1,400 cubic metres of concrete into the south cofferdam, non-stop for around 24 hours.

The three pylon foundations will sit below the riverbed and will each measure 4.5 metres high and up to 22 metres in diameter.

Construction of the foundations involves making a concrete base layer – or floor – inside the cofferdams. Following this, a cage made of steel reinforcing bars is assembled and encased in steel matting. A working platform is also installed to provide access for site workers.

Upright steel reinforcement bars are then fixed into the centre of the cage to form the beginnings of the pylon shaft – this is the tall structure that will rise out of the riverbed to support the bridge deck. Once the assembly work is finished the concrete pour can take place.

“This is one of the biggest concrete pours that I’ve ever been involved with. We’re using a massive amount of concrete – over 600 truckloads just for the three pylon foundations. It’s an extremely technical part of the project and our teams will be working round the clock to get the job done.”

In total, approximately 127,000 cubic metres of concrete will be used across the project. That’s the equivalent of around 20,000 truck mixer loads of concrete.

Every single batch of concrete is rigorously tested at the project’s UKAS accredited site laboratory to ensure that the mixture is the right strength and composition.

“It’s a bit like baking a cake. We have to get the ingredients for the mixture exactly right. The concrete needs to be extremely strong and durable, given the size and scale of the bridge and the environmental factors of the estuary.”

As each pylon foundation is completed, work will begin on the pylon shafts.

At this point, a metal mould, known as formwork, will be lifted into place by a crane and attached to the pylon foundation for the concrete to be poured into.

The formwork will move up the pylon shaft allowing the pylon to ‘grow’. It is estimated that each section of the shaft will take around five days to build.

The three pylons, which will rise out of the riverbed to support the bridge deck, should begin to be visible in the estuary from September 2015.

“Starting work on the bridge pylons marks another significant step for this important infrastructure project. Work is progressing at pace now on all sections of the site and a huge amount of activity will be taking place over the next few months.”

Rob Polhill, leader of Halton Borough Council and chair of the Mersey Gateway Crossings Board, said:

“This is an important time for Halton. What we are seeing really is history in the making and we have a lot to look forward to in the future. Every construction milestone brings our new bridge one step closer. It’s going to be exciting to see the bridge pylons form in the estuary and I, for one, will be watching with interest.”

The economic, transport and social benefits the project will bring to the region include:

When it opens in 2017, both the new bridge and the Silver Jubilee Bridge will be tolled, but they will be free to Halton residents. 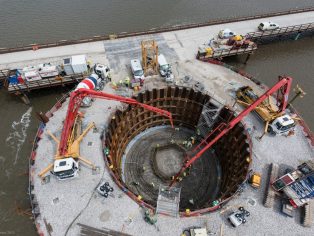