The construction industry’s March output expanded at the fastest rate since September 2014, according to PMI activity data across the sector for the period, signalling a bounceback from the pandemic.

Registering a score of 61.7, up from 53.3 in February, the latest data showed the fastest growth for six and a half years. Respondents to the survey conducted by IHS Markit on which it bases its figures reported “mobilisation of delayed projects, especially in areas like hospitality, leisure and offices.” There were also “higher workloads due to greater spending on residential construction work and rising new home sales,” said IHS Markit.

The company also reported “improving client demand and contract awards on projects that had been put on hold earlier in the pandemic,” as contributing to a “steep upturn in new orders” during March.

“Forthcoming new project starts” had catalysed a “solid rise in employment numbers,” with the rate of job creation the strongest for over two years. Purchasing volumes were also up, at the highest rate since November 2020. However the higher demand for products was leading to longer delivery times, respondents said – around 41 per cent of those surveyed reported longer delivery times in March.

Supply constraints and logistics were reported as problems particularly for imported items, and purchase prices saw the steepest increase since August 2008. Respondents “widely noted that suppliers had cited Brexit and Covid-19 as reasons for price hikes in March.

The survey also indicated “a strong degree of confidence for the year ahead” in terms of continued activity growth. Predictions were the “most upbeat since June 2015, reflecting confidence in the UK’s economic outlook, the improving pandemic situation, and pent up demand.”

Gareth Belsham, director of consultancy and surveyors Naismiths, commented: “The bounceback is turning into a boom.” He added: “Housebuilding work spiked at the fastest rate seen since the record-breaking, gravity-defying jump of last summer. No wonder optimism among builders is higher than it has been for nearly six years.

However, Belsham cautioned: “So far there’s still no sense of the longevity of this boom.”

Steve Plaskitt, partner at accountancy group MHA, gave the news a more qualified welcome: “The construction industry is cautiously optimistic. We are leaving behind a period of great uncertainty, and this year the UK economy is projected to grow at its fastest rate since 1948.

“Recent government action, especially in the spring budget, has certainly done its job and buoyed up confidence in the sector, keeping the construction plates spinning.”

Plaskitt added: “However, despite this positive outlook, there are some uncertainties looming on the horizon. The biggest is to what extent work-life priorities will change as a result of Covid-19 and how this will affect demand. This places a big question mark over the strength of the commercial office and city centre high-rise living markets.

“It is also unclear exactly how UK consumers will start to spend when they emerge from lockdown and therefore whether small local builders can look forward to more investments, for example in home extensions and improvements.” 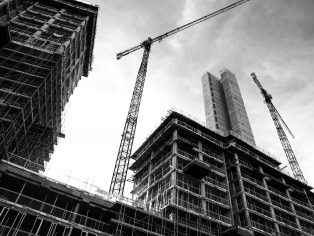