Coupdeville Architects, based in West London, are passionate about designing buildings. Their main focus is creating buildings suitably contextual to the site.

In the last year, they have started to work on Viking House, a disused office block which is being converted into a new contemporary residential housing block with a mixture of flats from 1 to 3 bed units to penthouse units. This is following the government’s new policy earlier this year allowing the conversion of offices to residential without planning permission. The reform is aimed at speeding up the conversion of empty commercial space into desperately needed housing.

The brief – to convert an unused office building into a new residential block. Viking House is 866 sqm big and is located in Swallodale Lane, Hemel Hempstead on a 3.2 hectares piece of land. The project started in October 2012 and is due for completion in the summer of 2015. They are going to redevelop it into 64 units veering sizes, 1 bed units to 3 bed units. The cost of the project is appox £3.8million.

The style of the new dwelling is quite interesting. The new section of the building comprises mostly of a slatted wooden facade, with slender vertical elements drawn from the architectural language of the existing facade. These elements not only offer structural support to the cantilevered design but also lends it’s self as a visual break to the building, allowing it to be appreciated in smaller segments. The approach behind the use of timber as a cladding system allows the new wing of the building to sit humbly next to the existing building and blends into the wooded landscape in which it sits.

The key feature of the new residential block is the circulation tower linking the old existing building to the new extension. The new extension on to the existing building attempts to not only balance the visual aspects of what was once already on the site, but sits appropriately juxtaposed to what was once an old and under appreciated building. Drawing on the ascetic aspects of this 60’s building, the new elevation backing on to the main road reinterprets the architectural language of the existing building; and is remade in to a new contemporary facade with balconies to the rear of the existing property. 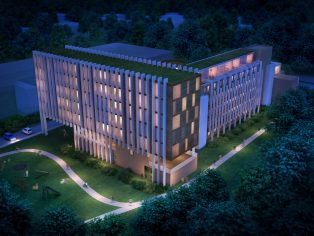