Since being awarded university status 11 years ago, Southampton Solent is establishing a growing reputation across many academic disciplines, including its industry-renowned maritime, media and sports courses.

In light of its growing stature, the University realised it needed a new academic hub to really showcase its excellence in learning, teaching, research and innovation and to project its spirit of success and ambition.

And it has achieved that in style with the Spark, its newly opened, striking flagship building on East Park Terrace Campus – an unmissable statement that also brings something unique to Southampton and cements the University’s relationship with it.

At its heart is a bright red, 20 m-long, curvaceous ‘Pod’ raised on slender angled columns in the centre of the building’s light-filled, five storey-high atrium.

Linked by glass-sided bridge walkways to the main building, this eye-catching sculptural form is designed to capture the imagination of those who see it. Yet surprisingly, it’s also a fully functional, enclosed 55-seat lecture space with a viewing platform on top.

The Pod is overlooked by glass-balustrade walkways and projecting balconies, serving as break-out spaces set among the white-walled atrium, designed to create a bright ‘welcome space’ for visitors, students, academics and university staff.

Beneath the Pod, exploiting the site’s topography, a broad stairway leads to the lower ground floor levels featuring two large lecture theatres boasting 150 and 200 seats respectively, along with classrooms, kitchens, offices and a plant room.

The Spark is the culmination of a four-year journey for the building’s designers, international architects Scott Brownrigg, to capture and realise the vision for the future of teaching and learning and to facilitate wider campus development.

After being awarded the project in 2011, the practice ran a programme of extensive consultation and engagement at all levels with the University and its key stakeholders to develop the project brief and design proposals. Planning was granted in May 2014 and work began on site in June 2014.

A well as being a hub for learning, Scott Brownrigg and the University were keen for the Spark to have a strong civic presence, enjoy a positive relationship with the park and be accessible by the community and businesses.

With no significant congregational space on the existing East Park Campus the University was using courtyard space and marquees for major events, a situation the Spark needed to put right.

To fulfil the University’s requirements, Scott Brownrigg director Ian Pratt and his team embraced some significant design challenges as opportunities.

The Spark is situated on the University’s former campus vehicle access ramp, accessed via East Park Terrace, the road that runs along the front of the campus. Not only was the vehicular access unattractive to look at, it effectively severed the development site from the rest of the campus.

Furthermore, the multi-level, stepped site is immediately adjacent to the 1960s-vintage Sir John Everett Millais Building, one of a varied mix of structures forming the nucleus of the institution.

“The first step was to free up the site by moving the vehicular access to the periphery of the campus, using land to the north acquired for development, also helping to reduce traffic flows along East Park Terrace.

“The building needed to be set back from the road with view across to the park. We proposed an L-shaped building adjoining the wall of the existing building, creating a three-sided atrium space at the building’s heart, the central circulation area. It’s lit by day by large linear roof lights and the west-facing fully glazed main entrance.”

The structure is flat-slab reinforced concrete with off-site, precast and pre-glazed concrete cladding panels from Techcrete. This enabled the envelope to be made weather-tight and insulated in just six weeks, saving time and money.

“There were complex engineering challenges throughout, such as avoiding the Southampton geothermal main – running within a metre of the eastern edge of  building – during piling.

“Integrating the new building with the existing one was certainly demanding. We needed to modify and back-prop parts of the 1960s building to install the atrium floor, while the East Park Deli cafe has been built inside the ground floor of the older structure as part of an entire redevelopment of that floor.”

A completely new, facade mirroring the exterior of The Spark was added to the external envelope of the old building to form the third ‘side’ of the atrium, enabling services, ducting and utilities to be run behind it.

“And all this happened while the University operated as normally as possible. The main contractor Interserve was very helpful and proactive in this area and throughout the project.”

Undoubtedly though, the greatest design and engineering challenges centred around the eye-catching Pod in the atrium.

“The idea for the Pod was born from discussions about what the University brand symbolises: ‘confident, bold, ambitious, dynamic, distinctive, imaginative, warm and welcoming’. That’s the kind of response we wanted to generate in people and we drew our inspiration from that.

“We wanted it to be functional but felt it needed to be a captivating sculptural feature. You can see elements of the University’s maritime heritage in there but people have compared it to many things; for example an alien craft from in War of the Worlds film, a pebble, a bean, an egg and even a sweet. To us, that shows people are engaging with it and pausing for thought.”

Constructed in the Netherlands by CIG, the Pod is made from 10 mm-thick, cold-pressed British steel panels, weighs some 67 tonnes and was fabricated using a hi-tech process.

Individual panels are cut by laser and shaped – mostly by computer but also using highly skilled human press operators. These components were welded together and ground smooth to create a single structure which was then cut into panels using hand-held angle grinders, taken into a car paint workshop and sprayed ‘Solent red’.

In the UK panels were lifted into place, bolted together and to the innovative steel superstructure designed by civil and structural engineers Scott White and Hookins with 6 mm shadow gaps between each panel.

“When you step inside it’s a bit like boarding a spaceship or a boat – you really do feel like you are about to embark upon a journey. It’s a destination in itself,” comments Pratt.

Situated on an island site, surrounded by roads, The Spark has a sealed facade to minimise noise and air pollution, necessitating use of mechanical ventilation and air conditioning. Yet Scott Brownrigg and the University achieved their joint ambition and the building achieving BREEAM Excellent status.

“The strategy has been to utilise the thermal mass of the concrete frame to balance out the heating and cooling,” explains Pratt.

Concrete soffits are exposed in the main teaching spaces, which feature prefabricated, multi-service ‘active chilled’ beams carrying the air supply and connected to air-handling units on the roof. Exhausted air leaves the classrooms through attenuated louvres and up into the atrium louvres where heat is extracted and reused.

This system is complemented by a battery of photovoltaic cells on the atrium roof and extensive use of low-e glass, while most of the classrooms are north facing, reducing solar gain.

The details of this system were captured in the Level 2 Building Information Model (BIM) produced by Scott Brownrigg and the other design consultants and used to generate all design and construction drawings.

“BIM was crucial to the success of the project and a fundamental design tool from the outset. It helped us to test out and successfully demonstrate our ideas, commission 3D printed models, produce fly-through animations and gain buy-in, understanding and finalisation.”

The Spark’s success can be measured by the reaction from the University leadership. As Professor Graham Baldwin, Southampton Solent’s vice-chancellor puts it:

“The building’s huge attention-grabbing central atrium has brought a genuine wow factor to the campus.”

“Scott Brownrigg have been instrumental in helping shape the future plans for estate development on the city campus.”

“Their bold, ambitious and innovative design encapsulates the University’s strategy and vision. The internal configuration of varying classroom types and sizes, and informal and formal social space demonstrates their understanding of the needs of teaching and learning for a modern university.”

And the Spark is already making an impression overseas, too.

“One University lecturer told us that during a talk in China he showed the audience a picture of The Spark they all spontaneously stood up and applauded. I think we can take that as a compliment.” 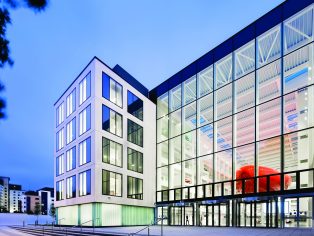 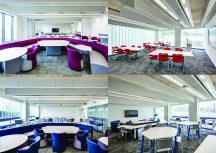