CRL is delighted to unveil the winners of its Venturous Builds campaign – an inspiring new web series that will showcase Britain’s inspiring self-builders and their construction achievements.

A contemporary family eco-home, a renovated Grade II listed mansion and a custom built eco timber house have been selected by the structural defects insurance specialist as being truly venturous of spirit.

The campaign, which saw CRL launch its logo into space, aimed to inspire those who have dared to be venturous, brave and unorthodox to share the details of their venturous builds. Winners will have their project filmed and featured on the online show.

The filming of these unique projects is now underway, with the first episode of Venturous Builds going live in the coming weeks. The Venturous Builds web series will be hosted by English designer and regeneration expert Wayne Hemingway.

“We’ve been blown away by the quality of all of the entries we’ve received for our Venturous Builds campaign. You’ve proved that the UK has some truly venturous self builders and developers. Thank you to everyone who entered.

“However, we were looking for the one-offs, the inspiring, the ingenious construction projects to feature in our Venturous Builds web series. Our three winners clearly demonstrate they have the courage, determination and an unwavering belief in their ability to create something truly unique.

“Venturous builds celebrates the pioneering self-builders who, against the odds, have dared to dream big and have created the homes of their dreams.”

“My wife and I designed and built our own home 19 years ago when our kids were young and it has been a true life enhancing experience ever since.

“Designing and building your own home is about getting something you really want, rather than getting a house someone else has designed or settling for what’s on the market. The winners of CRL’s campaign clearly knew what they wanted when it came to their home and they clearly are revelling in the results.

“Venturous Builds celebrates fantastic self-built homes and shows it’s about the spirit of getting on and doing it.  It is truly inspiring to witness the people and the love of what they have achieved at the end of the process.”

The construction insurance experts recognise that every opportunity is different. With CRL there is no set criteria – just an appetite for adventure.

Venturous Builds – the winners are:

Roy designed and built a modern, contemporary, family eco-home to meet the needs of their young disabled son after the family relocated to Cornwall five years ago. After failing to find anything suitable on the market, Roy decided on a self-build. Construction got under way in October 2014 and was completed in just eight months later. Built on a 90-degree curve, Rosedene is fully accessible with lifts and wide doorways, and is a happy family home.

“We’re delighted to have been chosen as one of the winners of the campaign and that our achievements have been recognised. After three years of struggling to find a home suitable for my family, in the right location, we decided on a self-build.

“I’ve worked in architecture for 14 years, so have always had an interest in design, especially with bespoke properties. I felt considering the cost of buying a house compared to adapt or extending to cater for my son who has cerebral palsy, it would be more cost effective to build something from scratch to and incorporate everything we needed from day one.

“We are really pleased with the end result and happy to be living in our dream home.”

Holme Hall Manor is a beautifully renovated Grade II listed mansion which has been sympathetically converted into stunning apartments. A family home for more than 200 years, and former retirement home and nightclub, Holme Hall was gutted in an arson attack in 2004. It was derelict for more than 10 years before being bought at auction by Berkshire Homes. The heritage site has now been transformed into 10 one and two-bedroom apartments with impressive views over the Cliviger Valley and a wealth of character.

“Holme Hall has been an incredible project. It was previously owned by four experienced property developers who gave up on restoring this ruin. Our appointed surveyors advised us to put this property back in the auction and cut our losses because it would take us more than two years to complete and we would lose money.

“However, we said no way. The rebuild took us six months to complete from start to finish. The local residents who have a lot of memories of this magnificent 400-year-old building were thrilled to see Holme Hall restored to its former glory.”

Stommel Haus, a German manufacturer of timber houses, was commissioned to develop a custom built, energy efficient eco timber house. The house, which the owners called “Heartwood” was built only using untreated Arctic Heartwood Spruce from FSC certified forests in Finland. This stunning three-bedroom home is insulated using recycled newspaper and recycled glass. With 216 m² living space, there is also a double height dining room from which you can see the vaulted timber ceiling, with views over the beautiful rolling hills of Deeside, in Aberdeenshire.  The house is heated using a heat pump and ground-breaking technology “Heating with Ice”, which uses the ambient heat and solar thermic energy, the energy in an underground water tank and latent energy in ice.

“Heartwood is a fantastic bespoke home and we are delighted to be named as one of the Venturous Build winners. What sets this property apart is the Scottish owners eco-commitment, they have used ground-breaking technology to ensure it achieves the highest in energy efficiency, while working with a German partner to deliver the home of their dreams.” 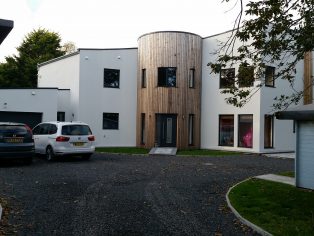 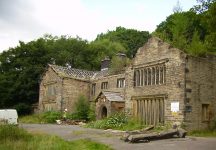 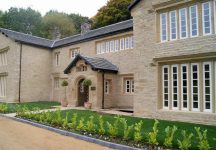 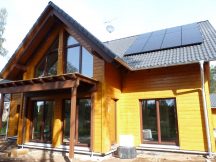