Crosslane Student Developments, part of the Crosslane Group, announces that construction has commenced following successfully securing planning permission for the redevelopment of a site on Albert Street, Newcastle, into a new 135 bed, purpose-built, premium student accommodation scheme. The total value of the development is approximately £12 million. Crosslane has invested significantly in Newcastle delivering, with Albert Street, four student accommodation developments over four years, with a combined total of 701 beds and a value of approximately £60 million.

Crosslane has partnered with The Torsion Group to undertake construction, with practical completion expected by August 2017, in time for the 2017/18 academic year.

The high specification scheme is located in central Newcastle, immediately adjacent to the City Campus East and within a short walking distance to the main campus of the University of Northumbria. Newcastle University is also nearby, as well as metro and bus links, shops, restaurants and bars. The property will comprise 114 beds in cluster flats and 21 self-contained studio apartments. The development will boast high quality communal facilities, including a common room/entertainment area, gym and a landscaped courtyard, as well as an onsite management office. Prime Student Living, the student accommodation lettings and operational management arm of the Crosslane Group, will be responsible for marketing and letting the property prior to completion.

Newcastle is an exciting student city, with two popular universities, and a student population of approximately 51,000 students. Newcastle University is a Russell Group university which attracts some 23,000 students from around the world and a high proportion of postgraduates. Northumbria University is focused on research and business with over 28,000 students, making it one of the largest universities in the UK. Demand for purpose-built student accommodation in the city has seen a significant increase, with an expected rise of approximately 36 per cent per cent in 2015 to around 54 per cent in 2018.

Crosslane Student Developments acquired the freehold site on Albert Street in August 2016. The property was previously a specialist car dealership and workshop, called Formula One.

Lambert Smith Hampton advised and acted for Crosslane Student Developments during the planning process and Day Architectural Ltd are the architects.

“We are pleased to commence building at Albert Street, our fourth development in the city, and help to meet the strong growth in demand for this type of student accommodation in Newcastle. Crosslane has invested significantly in the city, by delivering, with Albert Street, a total of 701 beds with a value of approximately £60 million.

“Crosslane has a successful track record of developing high quality student accommodation, working in close partnership with local planning committees to ensure we deliver schemes for the long term in a responsible and reliable manner, for the benefit of our customers and the surrounding neighbourhoods.

“We continue to grow our identified pipeline of potential student accommodation investments in Newcastle and other prime university cities in the UK and Continental Europe.” 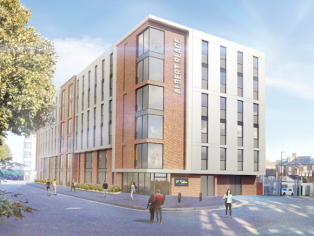