CUPA PIZARRAS’ Heavy three slate has been specified by housebuilder ZeroC to bring a traditional look to houses being built in the new town of Tornagrain, near Inverness.

Tornagrain has been designed as a traditional market town and will provide residents with a range of facilities including primary and secondary schools, retail spaces, sports facilities and parks. The town’s houses and buildings will vary in appearance to reflect the look of towns of the Inverness region. Tornagrain is scheduled to be completed in phases over the next four decades and will eventually create a community of 12,000 residents.

The Tornagrain proposal was submitted to the Scottish Sustainable Communities Initiative (SSCI) and was among the 11 projects awarded ‘Exemplar’ status. The SSCI was introduced to encourage the development of new communities that would provide a high standard of living with housing that was built to last. Part of receiving the Exemplar status was demonstrating that the materials used would be of the highest quality.

The in-house design team at ZeroC selected CUPA PIZARRAS’ Heavy three slate as a suitable alternative for the Ballachulish Scottish slate that was widely used until the quarries closed in the mid 1950s. The dark-grey, 7-8mm Heavy three convincingly replicates the characteristically thick, Ballachulish slate. The advantage of a heavy slate is the additional weather resistance that was vital for this project due to the proximity of the development to the North Sea coast.

“The main focus for the houses at Tornagrain is ensuring that the design combines traditional materials with modern building techniques to create a comfortable environment that also replicates the established look of a town in this area of the country. CUPA Heavy three was among a very limited number of slate products that could replicate the look of Scottish slate.”

“We have worked with CUPA PIZARRAS for about 25 years on a number of projects and are very familiar with Heavy three. We’ve always been impressed by the quality and consistency of the slate so we were pleased that Heavy three was selected as the product of choice on this project.”

To find out more about the CUPA PIZARRAS range of natural slate visit: http://www.cupapizarras.com/uk 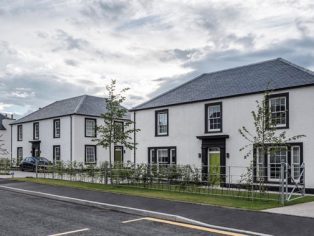