Dallmer has supplied its stylish CeraLine shower channels for a chain of popular private fitness clubs stretching from the capital to the Midlands: being specified for their high discharge rates and excellent installation characteristics as well as their attractive appearance: proving their all-round fitness for purpose.

The easyGym operates 10 venues created by the group, which had previously spread its wings from airline flights to budget hotels. The Mall in Wood Green is one of the latest venues to be refurbished. Dallmer was able to supply the CeraLine W2000 units so that they could be finished on site. The latest contract was carried out by main contractor, Lovebuild. Work was completed on schedule, in time for the June opening, with the design of the rugged, stainless steel and polypropylene drainage channels helping to speed both the plumbing connections and the laying of the floor tiling. The two metre long sections of channel feature sanded flanges to ensure a secure bond with the under-tile waterproofing layer; while the height adjustable legs facilitate millimetre accurate levelling. As in this instance the CeraLine is normally aligned with the wall of the shower area to remove water effectively from the surrounding floor surface. In fact with water filling to a depth of 20 mm around the CeraLine W2000, the hydraulic design of the Dallmer channel offers a flow rate of 1.4 litres per second compared to just 0.8 for standard channels.

The CeraLine W2000 can also be laid with temporary blanking plates while the waste water connection is made using a ball-jointed side outlet which is adjustable from 0-15 degrees. A spokesperson for the project team commented:

“Dallmer’s CeraLine W2000 channels are ideal for locations like the easyGym changing rooms, where clients expect the facilities to look their best. The CeraLine is simple to work with when positioning and laying the tiles up to their sides, while they also remove water very effectively and are easy to keep clean.” The W2000 units for the four male and four female changing rooms in the Wood Green easyGym were supplied by Plumb Inn Merchants of Enfield, one of Dallmer’s merchant stockists. 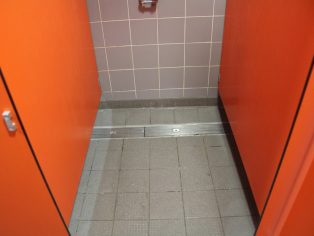