Winn & Coales Densoband has been chosen for use in the installation of new crash barriers on the A898 Erskine Bridge, Glasgow. The volume of HGV traffic has greatly increased since the bridge was opened in 1971. Consequently the existing barriers in the central reserve will not provide appropriate levels of protection to the bridge towers and cable anchorages against impact from the largest HGVs.  Similarly, nearside barriers are being replaced in this project due to be completed by May this year.

The work is being carried out for Transport Scotland who appointed Highway Barrier Solutions (HBS) as Principal Contractor. Scotland TranServe is the Engineer and manage the work.

The Glasgow branch of Briggs Amasco, specialists in industrial roofing and surface waterproofing,  recommended the use of Winn & Coales Densoband  in the reinstatement of the road asphalt surface adjoining  the steel posts of the new crash barriers. Working in conjunction with Scotland TranServe, Briggs Amasco applied all the asphalt reinstatement as well as the Densoband.

Densoband is approved by the Department of Transport in the Manual of Contracts 7th Edition for use in asphalt wearing course joints for asphalt and asphalt to concrete interface as an alternative to the previously commonly used bitumen. Because water, salts, pollutants and weed seeds etc cannot penetrate the sealed joint, it remains unaffected by extremes of temperature and further deterioration. 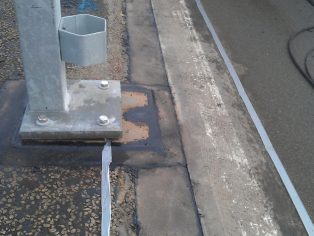