Students from two of the world’s driest Arab states travelled 3,000 miles to Derby to outline their plans to improve an undeveloped city green space.

Ten students and their tutors from Architectural courses at Kingdom University in Bahrain, an island state in the Arabian Gulf, and Saudi Arabia’s University of Dammam, worked with University of Derby undergraduates on a project – called the ‘3rd KU Winter Practicum of Architecture and Design’ – to develop the green space next to Derby’s Seven Stars public house.

Derby City Council will shortly be improving the grassed site – bounded by King Street, Quaker Way and Lodge Lane – and initially approached the University of Derby for design ideas.

Its tutors saw it as a perfect project on which the visiting students and those from Derby’s own Architectural Technology, Architectural Venue Design and Construction Management & Property Development degree courses could collaborate.

The international teams made a site inspection before coming up with a range of interesting tree planting, seating and path layout suggestions; which were then presented to a panel of council officers.

The Middle-East students had to adapt their thinking for Derbyshire’s much wetter climate and greener environment, being more used to mostly desert areas with little rainfall or grasslands.

“Our graduates may go on to work anywhere in the world, so it’s important that students at Kingdom University know how to deal with different environments. We have had them doing projects at home, in Greece and now in Derby.”

“This is my first time in the UK and I’d like to see more of it. There are a lot of different things to consider on a project like this; socially, the costs and the different culture.”

Eleni Tracada, Head of the Built Environment Research Group at the University of Derby, said:

“It was a real pleasure to see our students and the visiting ones working together on what must have been a very different kind of project for our guests.

“It’s vital that Derby’s students are exposed to different kinds of thinking as, during their careers, they may well work abroad or on project teams including professionals from other countries.”

The students’ plans for the Derby city green space were presented to members of Derby City Council’s Neighbourhood Partnerships team. It will decide which of their ideas might be adapted for the authority’s own plans for the site.

University of Derby students are due to join council workers for a tree-planting event on the site, set for March 31.

For more information about the University of Derby’s Architecture courses see website www.derby.ac.uk/engineering-technology/architecture 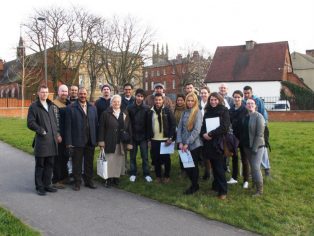 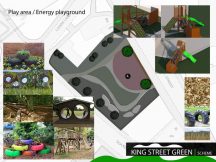